MMT image of the plume and its shadow?

EDIT: Having seen an image from Palomar during this morning's press briefing, I think that the fuzzy blob that I thought was the plume in this image is just a spot of sunlight on the far crater wall. So I'm retracting my enthusiasm about this image. I am pretty sure this image shows the LCROSS impact plume and its shadow as seen from the MMT observatory in Arizona, but as Alan Boyle just pointed out, the time stamps indicate the photos were all taken before the nominal impact time. It'd be a surprise if their clocks were off; but that could have been a wonky software setting. So now I'm a bit confused. I post the image and video anyway in the hopes that it really is the impact plume and its shadow. 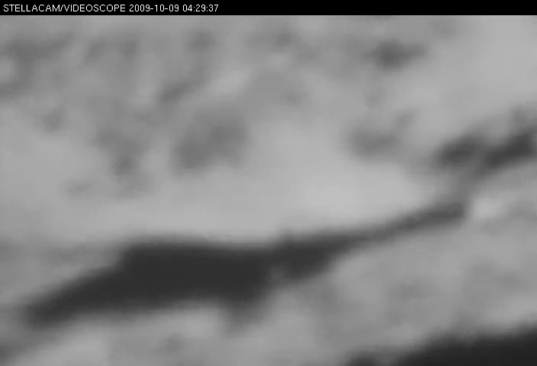 MMTO image of LCROSS plume on crater Cabeus A

The 6.5-m MMT telescope is operated by the MMT Observatory (MMTO), a joint venture of the Smithsonian Institution and the University of Arizona. The MMT is located on the summit of Mt. Hopkins, the second highest peak in the Santa Rita Range of the Coronado National Forest, approximately 55 kilometers (30 miles) south of Tucson, Arizona.