Way early tomorrow morning, LCROSS and its Centaur upper stage will crash into the lunar south pole. To the Moon, it'll be just another day; stuff the size of these two spacecraft crashes into the Moon about once a week, on average. (They crash into Earth even more frequently, because of our larger mass, but our atmosphere would cause them to burn up rather than make a crater.) It's only special to us because we've carefully selected the spot where the two spacecraft will crash to be one where there could be a bit of water ice (and maybe some other interesting volatile stuff) lurking in the soil below the surface, and we'll have the world's best telescopes trained on it to see if we can detect any of that water or other interesting volatile stuff.

There was an audio teleconference just now providing some information about what to expect. First, here's the basic facts and a schedule: 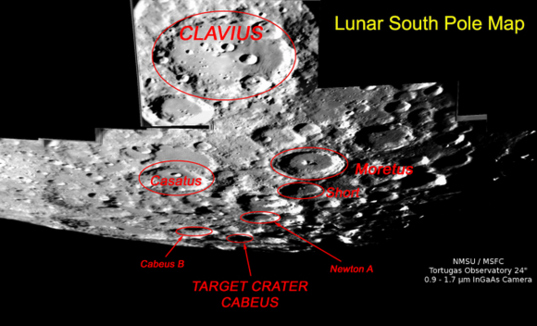 For those of you with 10-inch or larger telescopes, you have a chance of observing it directly; Universe Today has a nice observing guide. For the rest of us, here's a list of places to keep track of what's going on:

Don't raise your expectations too high for the drama of the impact, project manager Daniel Andrews warned today. The ejecta should be rising against a shadowed ridge. What we're looking for is "a fuzzing or shimmering across" that shadow that will "last about 30 seconds. Basically, you'll see the blackness get less black as the ejecta moves in front of it and falls back down to the surface." For astronomers actually hoping to see the impact through their own telescopes, "The hardest thing is to find that shadow and find that crater."

There was some interesting information from principal investigator Tony Colaprete on their decision to move the target from Cabeus A to Cabeus proper. (I should say that these were hastily transcribed notes from a live conference -- any mistakes are mine.) "We worked with India and Japan as well as Lunar Reconnaissance Orbiter instrument team leads to refine the targeting. We convinced ourselves that Cabeus proper was a better target [than Cabeus A]. We've always known that Cabeus has a lot of hydrogen associated with it. As time went on, that association became more clear, the signal became stronger."

Why didn't they choose Cabeus in the first place? "We shied away from it because of topography. It's large, 100 kilometers across and fairly deep, 3-4 km deep. And on the side that faces Earth there's a mountain about 2 kilometers tall. We feared we'd have trouble getting ejecta in view of Earth. New topography measured by Kaguya and by LRO LOLA revealed a serendipitous situation for us. For our impact date, the Sun will be shining in through a cleft right along the rim of the crater. The cleft will let sunlight in that streams across the floor, so the ejecta gets into sunlight early, after only about a kilometer rise. So that's great news.

"We looked at where we'd want to impact -- coldest temperatures, smooth flat floor, and we found that we could find a spot that limited the blockage from the mountain because there's a saddle in the mountain; we'll be able to see the ejecta from Earth after only about 1.5 kilometers of rise. One other aspect that made it more attractive was backlighting. Cabeus A would have had a bright crater wall behind it -- you're looking at faint dust against a bright background. With the new Cabeus target, the far side of the valley actually casts a shadow behind where we're impacting.

"The data has reaffirmed it: There is hydrogen down in that crater, and we're going to go dig some of that up."

How quickly will they be able to determine whether they found water? "We don't anticipate saying anything about the presence or absence of water immediately. We'll be able to say whether experiment worked -- we saw ejecta, flash, that sort of thing -- but it's probably going to take a couple of days for team to say what they detected in data, at least a couple of weeks for analysis."

Some notes on what LCROSS should record: "There will be five cameras on LCROSS returning data. They are bandwidth limited, so there will be a couple frames per second from all cameras. This changes as the impact occurs. Right at impact when there's a flash we'll turn off the visible camera and will go to the near-infrared camera because in the infrared the flash lasts longer. For the curtain we'll go to a different series where we go to the visible and thermal cameras for imaging the curtain. At one minute before the shepherding spacecraft impact we go into crater phase. We're flying through the vapor cloud. We're looking at the Sun with the side-looking spectrometer to measure total ice concentration in the vapor cloud, and we'll use the thermal cameras to image the crater we made with the Centaur. We should get a few pixels across that crater."

Here's a cute video providing an overview of the mission. Love the "Blue Danube Waltz."

Stay tuned to my Twitter feed for news and updates!