I'm a recent adopter of the iPhone so have been fiddling around with various Apps -- which, for those of you who don't own an iPhone or iPod Touch, means "software that runs only on the iPhone or Touch." So I apologize to the vast majority of my readers who don't own one of these devices for taking up space with this review -- but I have to; Mars Globe is seriously one of the reasons I went with the iPhone instead of the BlackBerry when I was ready to upgrade to a smart phone. 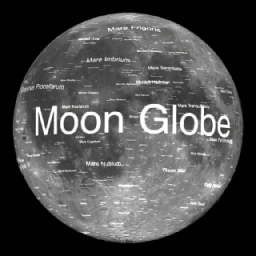 But I'm getting ahead of myself. Let me introduce Moon Globe first, which just became available yesterday. It was developed by Michael Howard, who also developed the Midnight Mars Browser software that I use practically daily. Here's Michael's description of Moon Globe, which costs you a mere 99 cents:

Discover Earth's Moon with amazing 3D graphics and touch navigation. Moon Globe shows you how the Moon appears today, and lets you zoom in like a telescope with up to 500x magnification. Switch to globe mode, and you can spin above the surface, taking in the hidden far side, and look over the limb to see Earth in the distance. Surface features and landed spacecraft are labelled in an elegant 3D tag cloud. Adjust the time dynamically with on screen controls, and watch the sunlight move over the terrain. It even shows you where the Moon and Sun are in the sky at your location, with its dynamic sky compass.

This software is so cool. Fire it up and you see the Moon in its current phase; a cloud of place names float over the surface, scaled so that the words are exactly the same width as the feature it names. Spread two fingers on the screen to zoom way in, and the words grow along with the base map; this would be so handy to a beginning (or maybe even experienced) backyard astronomer eager to know the names of the features she was looking at through her binocs or telescope. In fact, there's buttons on the bottom that allows you to flip south for north and left for right to make it look upside down and/or backwards if that's what your 'scope does. Another button toggles the map tags from terrain features to lunar landing locations to a tag-less view. Tap any of the tags and you'll get a brief explanation of the name that comes from the Planetary Nomneclature Gazetteer, as well as a link to search the feature on Google.

Now pinch your fingers to zoom way out and notice there's a slider at the top of the screen. Use your finger to slide along it, and zoom! There goes the Moon through its phases -- slide left, get yourself a waning crescent, slide right, and it's waxing. But -- holy cow, and this is the first place that the app gets beyond just "neat" to "wow, this is amazing" -- when you change the phase and the terminator sweeps across the disk, you might suddenly notice that craters get shadowed rims as the terminator approaches. Underneath the Moon map and place names there's actual topographic data, which Mike has incorporated into the phase display in order to show lunar topography realistically shadowed at every possible phase.

It gets cooler. Tap the little telescope symbol at the lower left and suddenly you're in a totally different viewing mode -- no longer locked to the Earthbound view of the nearside alone, you can use the iPhone's gestural controls to set the Moon spinning and journey across the limb to the farside. I like to sweep my finger gently across it to set the Moon slowly rotating; watch it long enough and you'll suddenly a colorful spot dart across the background -- that's Earth, in its correct relative position to the Moon. I've already used the software (I'll admit here I was a beta tester) to locate terrain seen obliquely through Kaguya's HD television cameras, and identify craters visible in the spacecraft's field of view.

There's a similarly cool gestural control back in the original Earth-based view, where you can tap the clock and then set that spinning, so you can watch time and the lunar phase pass; a compass view lets you see the motion of Earth and the Moon relative to your local horizon. Here's a few screen caps:

If Moon Globe is amazing, Mars Globe is unbelievable. It has similar features to Moon Globe, with the terrain information and landing site locations and gestural controls and slider to change the time of day, but not only has Mike incorporated a way better topographic data set into Mars Globe (the MOLA topographic map of Mars being far superior to anything that's publicly available for the Moon), but he even included Mars' atmosphere! The landscape gets quite hazy toward the limb. Zoom in on the limb and set the globe spinning and you'll see the thin fuzz of the atmosphere against black space. In the video below, Mike runs it through its paces:
gain, I've already used Mars Globe repeatedly to help me identify features within the field of view of Mars images. The quality of the color map and the underlying topography, which together set up beautifully shaded views of the Martian surface, is incredible. Mike's even included handy clocks for both rovers that make it tremendously easy to convert between Earth date/time and Mars sol/local solar time -- now or in the recent past (because you have to do this with a slider, it can take a while to get to years in the past).

Unfortunately Mike learned a painful lesson when he included one too many features in Mars Globe: for every one of the thousand-plus terrain features, he includes links to sites like Wikipedia, ESA and NASA websites, and even the one you're currently reading with further information relevant to each feature. Sound like a good thing? It is. It's great. But because it links directly to such websites, Apple required that the app be given a "17+" rating, because people can get to naughty stuff when they go to websites. Seriously. When you buy Mars Globe you're warned of "Frequent/intense mature/suggestive themes." It's absolutely ridiculous. Mike avoided it in Moon Globe by just directing people to Google searches instead of more direct, relevant links, which seemed to satisfy Apple at the same time as it's less educational and (absurdly enough) more likely to lead you to mature content.

But none of this is Mike's fault. Any of you who are reading this and who have an iPhone or Touch, go get both of these apps; they're a steal, and you won't be sorry. 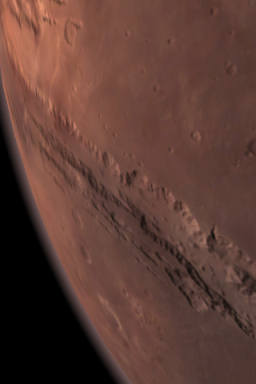