I learned via Twitter this morning (from one of six master teachers who have been Tweeting to kids throughout the encounter) that MESSENGER went into safe mode just before closest approach -- I'm assuming at the time that that unexplained signal drop occurred. The teacher, Gene Gordon of New York, who Tweets as Porchdragon, reported that that means there was no science data gathered after closest approach, although approach imaging was unaffected. I'm sure we'll hear more about this later today, but here are some things to keep in mind

Of course there's bad news: There was unique science being performed after closest approach that just won't get done. The gravity data, the neutron spectrometer close approach sequence, and other things I don't know about -- the flyby was a uniquely close encounter with the equator that won't be repeated. But before people start moaning about science lost, let me just remind you that the only reason we know about what science was lost is because the science team was kind enough to share their plans with us before the flyby began. Some missions avoid this potential image problem simply by not telling people anything about what they plan to do, keeping expectations low. But you know what? If expectations are low, so is excitement and emotional involvement. So let me say right here: thanks to the MESSENGER team for telling us so much about what you were planning to do, even if the safe mode prevented it from getting done.

I'm sure we'll hear more. In the meantime, here's that new image. And one thing to look out for in any later images they release: I noticed yesterday while fiddling around with the Solar System Simulator that Venus should be sitting there, a brilliant light in the background, in most of the wide-angle camera image shots of Mercury taken as MESSENGER approached. 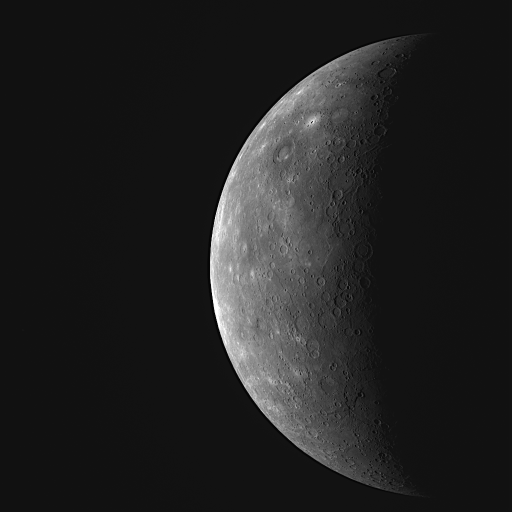 MESSENGER captured this image of Mercury on approach to its third flyby, at about 19:47 on September 29, 2009.