I just posted Marc Rayman's latest Dawn Journal, and it contained some surprising and welcome news that I wanted to make sure you didn't miss: A "seemingly modest improvement in solar array power" over what was budgeted for in the original mission profile results in Dawn's ion engine performance being "even better than engineers had been counting on. The probe will be able to reach Vesta about 6 weeks earlier than had previously been planned. Moreover, the newfound capability will enable the craft to travel from Vesta to Ceres more quickly, so the deadline for leaving the first world to reach the second on schedule in 2015 is about 6 weeks later. Together, these changes allow the explorer to increase its planned 9-month stay at Vesta to 12 months."

This is fantastic news -- many congratulations to the Dawn team for the outstanding performance of their spacecraft! I expect that what amounts to a mission extension before Dawn even arrives at Vesta won't change the originally planned set of science observations. What it should permit is for the team to respond to the usual sort of mission anomalies that can leave gaps in global data sets, and maybe it'll let them perform more detailed, targeted observations of spots on Vesta of unique interest (much as MESSENGER is just about to perform targeted observations at spots on Mercury identified in data from its previous flyby). 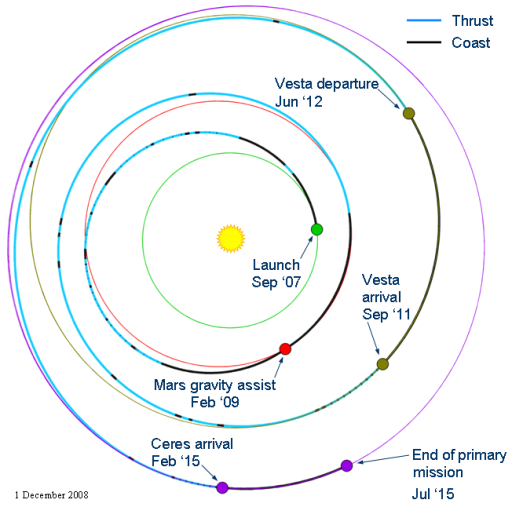 And here's the new trajectory, updated using the new predicts for Dawn's engine performance. You can see how Dawn will spend substantially more of Vesta's "year" in orbit there. 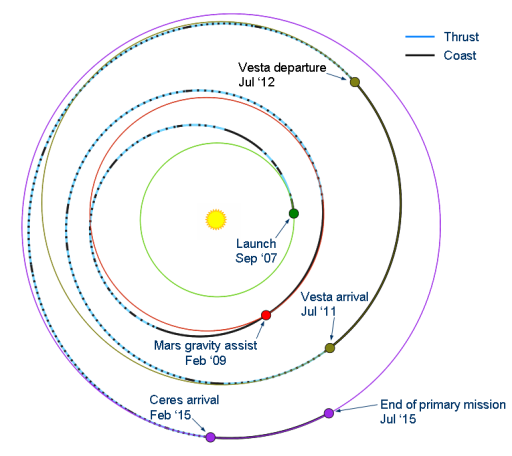 Dawn's trajectory as of September 2009