Planetary Radio Q and A: Who sees better, Hubble or ground-based scopes with adaptive optics?

This week's Planetary Radio looks at the Inflatable Re-entry Vehicle Experiment, or IRVE. On "Questions and Answers" I answered my this question:I read that adaptive optics can only be used for infrared, not visible wavelengths. Why is that?

My answer comes from the European Southern Observatory's introduction to Active & Adaptive Optics, with a little help from Heidi Hammel. Thanks Heidi! 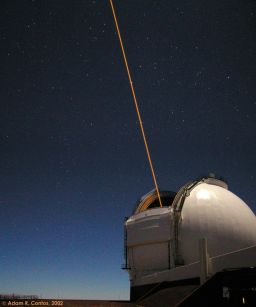 Keck's Laser Guide Star Adaptive Optics (LGS AO) system measures atmospheric disturbances and corrects for them, producing an image of the sky far superior to an uncorrected optical view. Most adaptive optics systems rely on the presence of a known bright star near the object of interest, which enables the system to continually measure the atmospheric effect and correct for it. The LGS AO system creates an artificial "star" by sending out a powerful laser beam, which scatters off sodium atoms in the atmosphere at an altitude of around 90 kilometers (55 miles). The LGS enables the AO system to operate as if it were monitoring a true star.
During the press briefing that heralded the new capabilities of the Hubble Space Telescope, the panel was asked how Hubble's images compare to those we can get from Earth. The surprising answer was that Earth-based telescopes can get sharper pictures than Hubble does.

The Keck II and Gemini North telescopes on Mauna Kea, and the Very Large Telescope in Chile, are all equipped with Adaptive Optics systems that allow them to outperform Hubble. Adaptive Optics uses a light source such as a bright star or a laser system to measure exactly how the scintillating atmosphere blurs what should be a pointlike image, and employs a flexible mirror whose shape is continuously deformed with tiny motors to correct for that blur.

But these systems work better with infrared than visible light. One reason is because longer infrared waves are less affected by atmospheric turbulence than shorter visible light waves are. Also, the fineness with which the correction needs to be performed goes up as wavelength goes down; for an 8-meter telescope you need 250 motors behind your deformable mirror for infrared adaptive optics, but you'd need more than six thousand motors for visible-wavelength correction. It just gets too expensive to do adaptive optics in the visible.

So while the big scopes can beat Hubble at infrared wavelengths, Hubble's got the sharper view in visible light. On top of that, Hubble can take pictures in ultraviolet wavelengths that can't even get through the atmosphere to telescopes on the ground.