An ALMA antenna journeys to its pad

This is a significant week for radio astronomy, but I'll admit that I am posting the photos and video below for no other reason than that they are gorgeous. I'll give this to all of you traditional astronomers (i.e. people who look at space from Earth rather than through spacecraft's eyes, as is my preference): you sure know how to pick spectacular places to build your scopes. A windowless office cubicle in a featureless office building at a NASA center has nothing on Mauna Kea or the La Silla observatory.

The images were taken on the occasion of the delivery of the first of 66 radio antennas to the plateau of Chajnantor, where they will eventually (in 2011) form the Atacama Large Millimeter/submillimeter Array, or ALMA. 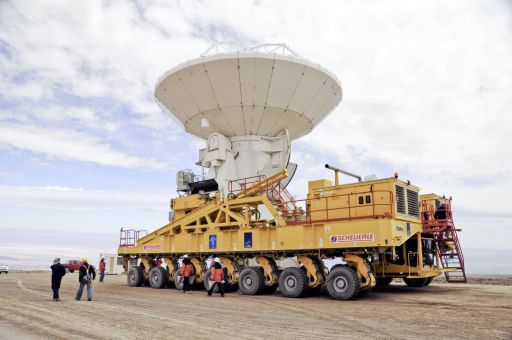 An ALMA antenna begins its journey to the plateau of Chajnantor