Well I'd hoped to get a full story on these amazing images posted before I had to dive into afternoon kid-related duties, but I just ran out of time. So here's a preview. Much more to come later! 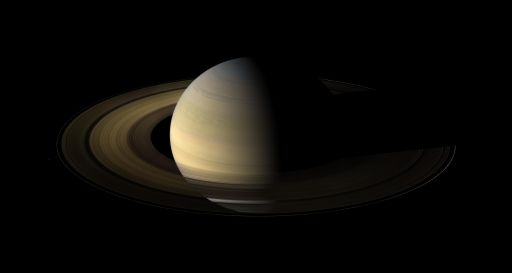 Just a day after the equinox, Cassini turned to capture the 75 images necessary to compose this striking panorama across Saturn and its rings. It's a rare and bizarre view of Saturn with the Sun poised almost exactly over the equator. With this lighting geometry, the rings are nearly dark, except where reflected light from Saturn strikes them, or where structures that rise above the plane of the rings catch the sunlight. The rings' shadow has collapsed to a skinny line falling across Saturn's waist.

Because of difficult geometric and lighting conditions, extensive processing was required to create this view. Cassini was relatively close to Saturn when it began taking the images for the mosaic and was continuously receding from the planet during the eight hours it took to capture the 200 images contained in the observation. (Photos were captured through infrared, violet, and clear filters in addition to the red, green, and blue-filter images used for the mosaic shown here.) So each of the images had to be reprojected into a common viewing geometry. The photos also had to be digitally processed to remove lens flares (artifacts that result from light scattering within the camera's optics) and to deemphasize seams between images.

Cassini had passed through its orbital periapsis at 11:37 UTC on August 11 and almost immediately crossed to the northern face of the rings, at 12:59. This crossing was only 10 hours after the Sun had precisely balanced over the plane (at 02:44). Cassini began capturing the images for this mosaic at about 06:00 on August 12, about 1.25 days after the moment of equinox, and finished taking data at about 14:00.