How does Hubble compare?

Apologies in advance for the number of acronyms in this post. There's no way to get around them.

Last week when the new, post-servicing-mission-4 capabilities of Hubble were unveiled, I kept asking myself: How do Hubble's new capabilities compare to what it could do before the servicing mission, and how do they compare to what we can do from the ground? I fired off some questions to Heidi Hammel, and did some research on my own within the Hubble instrument description documents.

There's four main Hubble instruments I was interested in comparing with each other and to Earth:

Here's the executive summary: what WFC3 brings to the party is a killer combination of large field of view and pretty high resolution. It's an improvement on WFPC2 in almost every way. It improves marginally on the resolution of the largest-field-of-view optical images that Hubble was capable of before (ACS Wide Field camera), and it really beats the pants off of the field of view of NICMOS, though at lower resolution than NICMOS can manage. (So it's a good thing that they're now reporting progress on getting NICMOS' cooling system working again.) And although Earth-based instruments at the Keck, VLT, and Gemini observatories can beat Hubble resolution using adaptive optics, that's only at near-infrared wavelengths; shorter than 800 nanometers (and especially in the ultraviolet) there's nothing on Earth that can get sharper images than Hubble.

I spent a couple of hours this morning noodling around the Space Telescope Science Institute website reading instrument descriptions. I came up with the following diagram that compares the capabilities of the different instruments. The top row (above the dashed line) compares fields of view -- how much of the sky each one takes in. (For comparison, the Moon at 30 arcminutes or 1800 arcseconds across would be about twice the width of the whole diagram.) The bottom row (below the dashed line) compares pixel sizes. Ideally you'd like to maximize field of view and minimize pixel size. 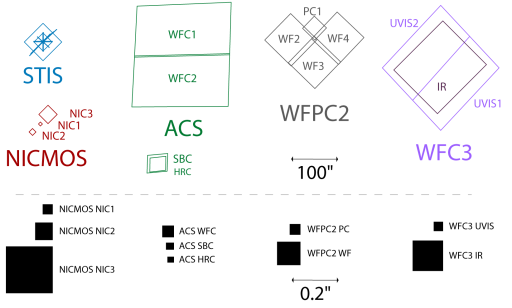 Some Hubble instrument fields of view and pixel sizes

Top row: the fields of view for five Hubble instruments are compared. Bottom row: single pixel sizes for four of the instruments. STIS: Space Telescope Imaging Spectrograph. NICMOS: Near-Infrared Camera and Multi-Object Spectrometer, which has three independent cameras NIC1, NIC2, and NIC3. ACS: Advanced Camera for Surveys, which has three channels: Wide Field, Solar Blind, and High Resolution. WFPC2: Wide Field and Planetary Camera 2, which has two channels: Wide Field and Planetary Camera. WFC3: Wide Field Camera 3, which has two channels: Ultraviolet-Visible and Infrared.
I took these diagrams directly from the instrument descriptions. The skewed appearance of the ACS fields of view is real -- it has something to do with the optics within Hubble. Also real is how some of the detectors on some instruments have overlapping fields of view (like those in WFPC2 and WFC3), while others (like those in NICMOS) are spread out on the sky, intended to be used totally independently.

Here's a table summarizing the same geometric information, plus info on detector size and wavelength sensitivity.

ow, what I really wanted to be able to do was to post a similar diagram, extending the comparison to Earth-based observatories. But after spending part of the morning trying to understand all the different variables and how they relate to each other, I didn't think I could. Here's what I can tell you. I asked Heidi Hammel to tell me which Earth-based instruments were most appropriate for comparison to Hubble. She gave me the names of three instruments that work on major scopes equipped with Adaptive Optics (AO). AO corrects Earth-based telescope images in real-time, as light is falling on the detectors, for the distortions caused by Earth's moving, shimmering atmosphere. They are:After a couple of hours of reading I must admit to hopeless confusion. What I can tell you is that all three Earth-based instruments are similar in that they have 1024-by-1024-pixel detectors behind three different cameras with three different fields of view. Keck II has the narrowest fields of view (10, 20, and 40 arcseconds) and correspondingly highest angular resolution of the three; NaCo is pretty similar to Keck II (14, 28, and 56 arcseconds); and Gemini North has the widest fields of view (22, 51, and 120 arcseconds) and correspondingly lowest resolution. The problem is that the size of pixels on Earth-based telescopes is not nearly as good a measure of what they can resolve as they are for a space-based imager; even with adaptive optics, there's always some blur. On top of that, the performance of Adaptive Optics systems is at its best at the point in an image where there is a guide star (natural or artificial) to give the computers a clue how to correct for the blurring effect of the atmosphere, and degrades away from that. Finally, Adaptive Optics only works at infrared wavelengths (why? I'll answer that question in a future Planetary Radio Q and A). So I decided it just didn't make sense to do a direct comparison.

Why not just pick a few interesting objects out there in space and actually look at some comparable images? Nancy Atkinson over at Universe Today already did that for some Hubble targets, though she didn't specify which cameras the before and after images came from. I searched for some things to compare between the newly released Hubble images and the Earth-based ones that Heidi suggested I check, but I couldn't find anything comparable. I believe that the reason for that is the newest Hubble releases were selected in order to showcase the broad field of view of the new Wide Field Camera 3, and none of those Earth-based imagers holds a candle to WFC3 (or ACS's Wide Field channel, for that matter) in field of view.

In the end I feel like this was not a very productive use of my day! I guess what I've learned is that there isn't an easy answer to the question of how all these facilities compare. Which one you'd like to use depends upon a complicated game, trading between resolution, fields of view, wavelength sensitivity, the kinds of filters available (something I didn't even get into here), and how hard it is to get a proposal approved for time on the instrument of your choice.

With that, I'd better quit, and move on to something else! Hopefully tomorrow I'll have more to show from a day's work.