After I posted a report on the selection of crater Cabeus A as the target for the upcoming LCROSS impact into the Moon, I received an email with several questions about the target. The chosen site is not the center of Cabeus A. Rather it's a spot on the floor of a smaller crater on the rim of Cabeus A, where there are two "tantalizing purple pixels" (as my commenter called them) in a Lunar Prospector map of subsurface hydrogen. The email expressed curiosity about how large an area those pixels represented, and what the targeting accuracy of LCROSS was. Unsaid was the question: how sure is the LCROSS team that they'll hit the spot where Lunar Prospector saw hydrogen? 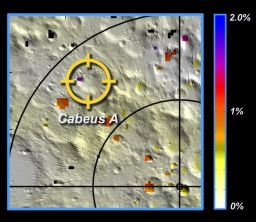 The crater Cabeus A is the target site for the LCROSS impact. Lunar Prospector data suggests that an area near the crater's northern rim may contain as much as 2% water in the soil.
So I sent a bunch of questions of my own to LCROSS project scientist Tony Colaprete, who got right back to me with answers. The crater on the rim of Cabeus A that contains those tantalizing purple pixels is about 15 kilometers across. The area covered by those purple pixels is "about 5-6 kilometers across; the area we are targeting is about 3.5 kilometers across," Colaprete told me. That 3.5 kilometers is the targeting circle for the Centaur. "The actual LCROSS performance is considerably better than this," he said. "The 3.5 kilometer diameter is meant also to take into account uncertainties in the data sets used for [target] selection." That is, they're going to zero in on that target accurately enough that the positional accuracy of the maps produced from earlier data sets is a significant contributor to their uncertainty about where they'll hit.

Three and a half kilometers is a pretty small target circle. For comparison, the Phoenix landing ellipse was 100 kilometers long and 19 kilometers wide. There are a great many reasons why it's easier to target a spot on the Moon accurately than it is to target a spot on Mars accurately, chief among them being Mars' pesky atmosphere. (It's variability in the density and height of Mars' changeable atmosphere on any given day that makes Mars landing ellipses so very long in the down-track direction.)

LCROSS still has a long way to fly before its impact next month. It was 687,000 kilometers away as of its last positional Tweet -- that's almost double the average Earth-Moon distance. "We are getting near the end and things are looking good!" Colaprete told me.

In related news, Lunar Reconnaissance Orbiter successfully achieved its mission orbit at 50 kilometers altitude yesterday; the science mission has begun. There is going to be a press briefing on NASA TV tomorrow at 10 am my time with early results from the mission. I don't know if they'll have an image from LROC from the science orbit or not -- it may be too soon. But I'm looking forward to seeing a lot of eye candy tomorrow.