Interpreting a crater on the Moon

The images from the Lunar Reconnaissance Orbiter Camera or LROC are absolutely stunning. The instrument team does their best to make the images accessible online through the neat Zoomify tool, but unless you have the world's largest monitor Zoomify won't let you see the full resolution of the LROC images. To do that, you have to download a couple-hundred-Megabyte TIFF file, find some software that'll open it (fortunately I have Photoshop CS3, and that works), and then zoom way, way in.

Necho crater on the Moon

Necho is a 30-kilometer (18-mile) -diameter crater on the far side of the Moon (5° S, 123° E). Named after an Egyptian pharaoh, Necho is a young, fresh crater whose floor is flooded with massive amounts of impact melt. This image is shown at 10 percent of the full resolution of 1.05 meters per pixel; it is about 5 kilometers wide. The full-resolution image can be browsed and downloaded from the LROC website here.

It's worth the effort. As Mars researchers discovered when they saw the first images from Mars Global Surveyor's Mars Orbiter Camera, and then rediscovered when they saw the first pictures from Mars Reconnaissance Orbiter's HiRISE, there's a resolution threshold somewhere around 5 meters per pixel, below which it's as if the alien landscape snaps into focus as a physical world that one could explore with hiking boots (and, well, I guess you'd need a spacesuit too). Above 5 meters per pixel, you're looking at the world from a great distance. Below that threshold, it's like you can reach out and touch it.

LROC represents the first time since the days of Apollo (and thus the first time ever for me) that there have been pictures returned that are below that threshold. Zoom all the way in to an LROC image and you get to landscapes you itch to explore with boots or maybe one of those nifty late-Apollo-mission dune buggies.

So LROC images have been fun to explore, but I had a problem. I'd never really studied the Moon. I studied Venus in graduate school so I'm comfortable with geologic interpretation there. There's been enough Mars missions and news that I feel like I have a pretty good grip on the broad brush of Martian geology; I understand the basics of its history and the fact that so many of the geologic processes that once operated (or still operate) there are so similar to Earth lets me use my Earth geology background to interpret it. And among the solid worlds of the icy satellites of the outer planets, there's been relatively little data collected, so it hasn't been hard for me to keep up with the state of the science. It helps that in grad school I shared an office with two fellow students who are now experts in the field (Geoff Collins and Louise Prockter) and was just down the hall from the postdoc who's now Cassini's project scientist, so I have friends who can help me with outer planet stuff.

But the Moon? I hardly ever studied it, except some brief work with some Clementine data while taking Carle Pieters' class on remote sensing, and every time I look at an image of the Moon I just know that there have been decades of research and publications on its geology and geophysics that should tell me what I'm looking at, and I just don't know about any of it. So I sent a plea for help to the LROC principal investigator, Mark Robinson, and he rounded up several people who volunteered to help bridge my ignorance about lunar geology.

For my first attempt to examine an LROC image I picked on Jeff Plescia for help. Jeff is a geophysicist at the Applied Physics Laboratory; I don't believe we've ever met but I read piles of his papers on Martian volcanoes in a class I took once on planetary volcanism. I sent him a bunch of little cutouts of the Necho crater image with questions, and he was kind enough to provide detailed answers.

The first thing I noticed in this image is the boulders. There are boulders everywhere, though they're preferentially located on topographic highs (which is in itself weird; more on that below). And many of the boulders are strikingly different in albedo from their surroundings, much brighter than the others. This and all the other crops below are at the full resolution of the LROC image, 1.05 meters per pixel. This is still only half the resolution that LROC images will have once Lunar Reconnaissance Orbiter gets in to its science orbit tomorrow. 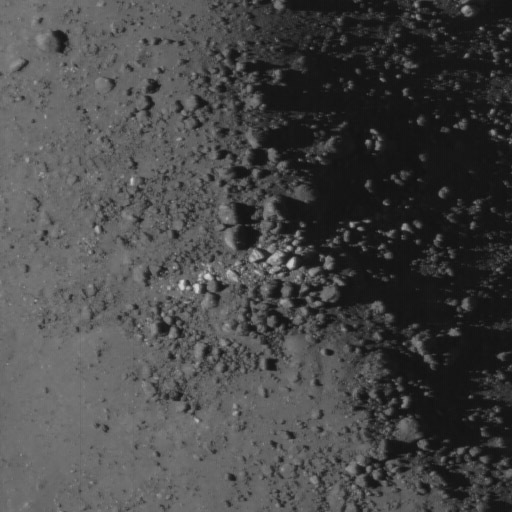 On the floor of Necho crater, some boulders appear noticeably brighter than others. The image is 538 meters square.

There are a number of possible reasons that some boulders would be brighter than others; I asked Jeff whether it was likely the bright boulders were more freshly fragmented material, or if they really are a different type of rock from the duller gray ones. He replied that "Basaltic rocks would be dark and the anorthositic highlands would be bright, so it's possible that the brightness variation is due to compositional differences. The fact that they occur in a line along a ridge makes me suspect they are compositionally different."

So why are the boulders preferentially located on topographic highs? That seems counterintuitive to a geologist who's used to thinking about how rocks break on Earth and Mars. On Earth and Mars you make mountains, and then erosion breaks mountains into smaller pieces that are usually immediately transported downslope. On Mars you also have impacts creating boulders, but those should be uniformly distributed and certainly not preferentially on topographic highs. Here's an example of what I'm talking about: 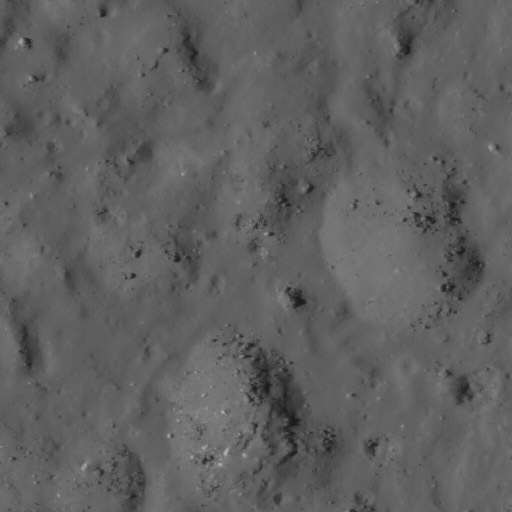 Necho crater detail: Boulders on hills but not in valleys

Knobs on the floor of Necho crater are covered with boulders, but the flat areas between the knobs are relatively boulder-free. The image is 538 meters square.

Jeff explained to me that "the floor is partly covered with impact melt. The lumps are probably either original lumps on the crater floor or pieces of the rim that dropped down. They were not covered by the impact melt, so you get the overall lumpy texture. The impact melt would not be expected to have boulders on it unless you were near a fresh crater, whereas the blocks of old terrain would be fractured and broken and might have boulders." This is what's called an embayment relationship -- the highstanding material is older, and molten rock flowed into the topographic lows, covering up the old texture of the surface and leaving a smoother deposit in its place.

The other element of this image that I was drawn to were all the tectonic features. "Tectonics" is a geologic term that refers to the breaking and movement of the hard outer shell of a solid world, and to the forces that cause these motions. Tectonism produces faults and folds in rocks, and geologists can read the patterns of those faults and folds to discover the nature of the forces that created them and tell the geologic history of a landscape. I asked Jeff specifically about two types of tectonic structures. Here's one: 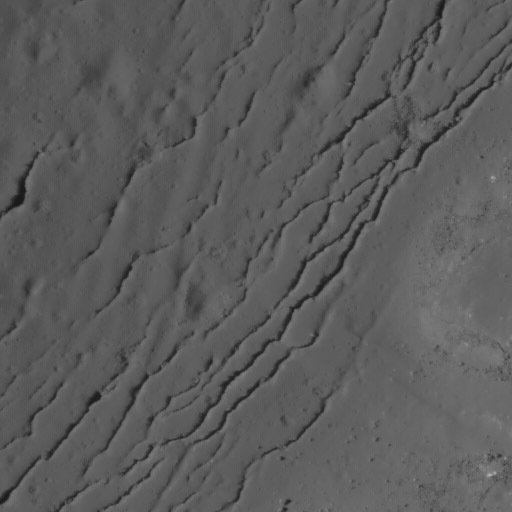 These tectonic features are located on the floor of Necho crater, where the floor butts against the crater wall.

Jeff explained to me how these formed as a part of the impact event that created Necho crater in the first place: "The floor of the crater is covered by impact melt, which was formed at the time of the impact event. There was a pool of molten material on the floor which solidified. Once it solidified, various things happen that create stress: the floor sags" -- this would cause compressional features, folds, to form in orientations concentric to the crater rim -- "the cooling material contracts" -- which would cause cracks to form with no preferred orientation -- "etc. What is seen in these pictures are tensional cracks -- in the case of the image, the surface was pulled to the upper left and lower right. This is a late-stage process, after the molten material cooled and froze into rock."

A different type of extensional feature is visible along the upper edge of the crater rim; I correctly guessed that these are faults resulting from slumping of the crater wall. Jeff went on to say that "These could continue to form today, depending upon the details." 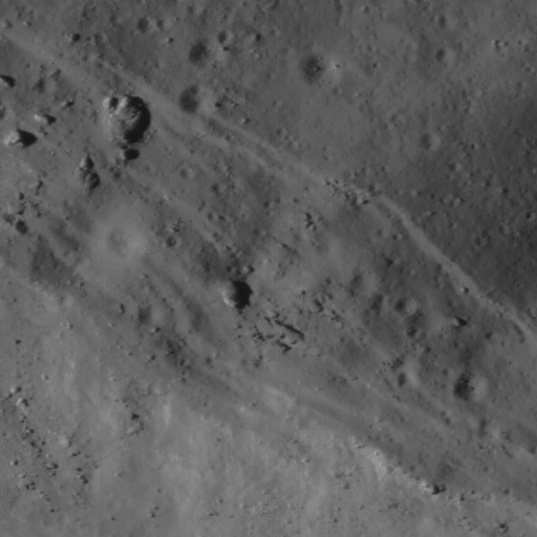 Concentric faults bound the rim of Necho crater; they run from upper left to lower right in this image. The image is 538 meters square.

And I noticed a funky albedo pattern on the crater wall, which turns out to result from a similar process: "The walls undergo a continuous process of slumping, so that fresh material is exposed. Fresh material always appears brighter than older material." 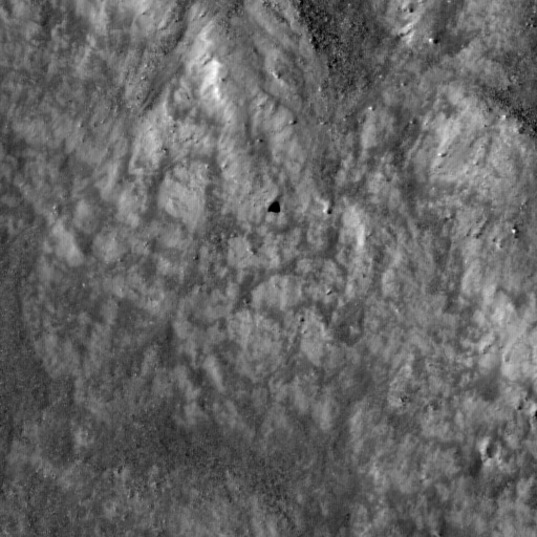 The wall of Necho crater is patterned with a network of dark and light material. The image is 538 meters square.

Finally, I couldn't resist sending along this one. I'm confident that most of you will understand I am joking when I call this the Alien Spaceship. Jeff played along: "Ooops, you weren't supposed to see that picture. Seriously, it's just an angular rock. There are quite a few scattered around." Our eyes trick us into thinking that there are all kinds of artificial-looking objects on the Moon and everywhere else. LROC is returning so many pixels, some of them are bound to look like alien spaceships...or Elvis...or maybe Amelia Earhart's airplane...or the long-sought reservoir of singleton socks that have gone missing in countless loads of laundry...you name it, I'm sure it can be found in these images! 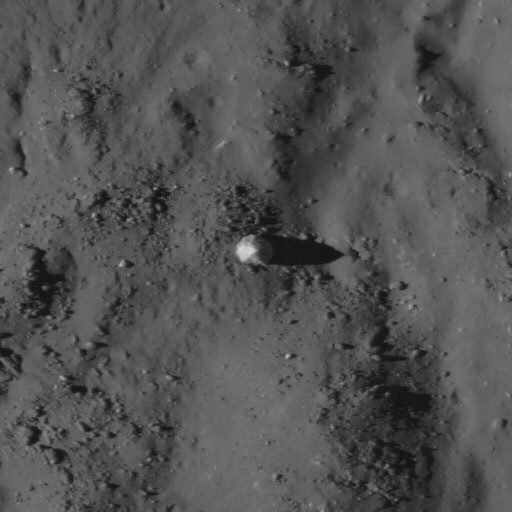 Many thanks to Jeff Plescia for taking the time to answer my questions.