A rare view of Iapetus

I was browsing the Cassini raw images website and noticed a set of photos taken of a skinny crescent Iapetus yesterday. It struck me that it's been a while since Cassini looked at this most distant and weird of Saturn's large moons -- I checked the site and if it weren't for this distant shot in March it would have been the first photo of Iapetus in at least a year (and I'm pretty sure this September 2008 one is not Iapetus -- there's got to be an error in the database there, it looks much more like Rhea, or maybe Tethys). Iapetus orbits terribly far from Saturn -- almost 3.6 million kilometers out -- and although Cassini's orbit apoapsis can reach to 2 or 3 million kilometers, it's rarely that far out when Iapetus just happens to be in the right place in its 80-day orbit for Cassini to see it. Imaging opportunities are few and far between.

So I tried to make the most of yesterday's set of 10 images, which included three through a clear filter, two each through ultraviolet and green filters, and three in infrared filters. I enlarged them all by a factor of three, adjusted the levels to make black space black, and erased cosmic ray hits. Then I stacked each set of same-filter images (this helps bring more detail out of the images and deemphasizes the JPEG compression artifacts that accompany their posting on the raw image website), then I made an RGB color image by using infrared in the red channel, green in the green channel, and ultraviolet in the blue channel. Then I converted it to Lab color and swapped the clear-filter image in for the Lightness channel (this should theoretically make details in the resultant image sharper). Finally I reduced the image in size by a factor of two, so the final picture is 150% the original resolution. Here's the result. Honestly I'm not sure if all of the image processing trickery brought out any more from these data than would have been visible with much less work -- but it was a fun, meditative activity for a weekday evening after the kids were asleep. 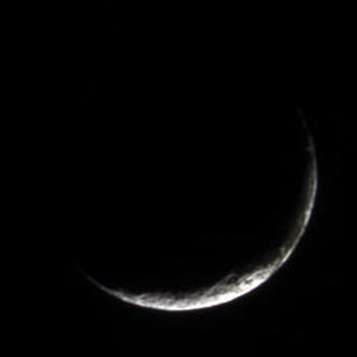 Cassini captured the 10 images that were assembled into this view of Iapetus on September 9, 2009 from a distance of 1.3 million kilometers. Iapetus was barely lit, at a phase angle of about 145 degrees.