I just went to the Lunar Reconnaissance Orbiter Camera home page to begin downloading a massive image to pore over and discuss, and what should I find there but a photo of the Apollo 12 landing site, which includes the earlier robotic lander Surveyor 3! I won't take the time to write much more than that -- I have been promising myself that when I make the time to write about an LROC image, I'll focus on geology -- but I feel like I must post it here, along with Phil Stooke's marvelously reconstructed version of the panoramic view from the Surveyor 3 lander. I love the fact that you can see astronaut tracks so clearly in these images. There's much better to come; LRO isn't even in its final science orbit yet (that happens in the middle of this month).The LROC website has a nice summary of the Apollo 12 mission.

UPDATE: Here's some interesting insight into this image from Phil Stooke: "The tracks will let us revise the [Apollo 12] EVA map - it's wrong in several places." Cool. Furthermore, he said, "Surveyor rode down on a retro-rocket, then discarded it and set down gently on small vernier rockets. That retro-rocket (especially its big spherical fuel tank) is somewhere near here, waiting to be discovered. I might predict that it will be the first piece of exploration hardware to be discovered in an LROC image, if a Lunokhod doesn't come along first." If you want to hunt for that lost (though, admittedly, unlooked-for) piece of Surveyor hardware, you can go here to download the full-size TIFF file of the LROC image. Keep in mind that there's no guarantee the tank is actually on this high-resolution image. 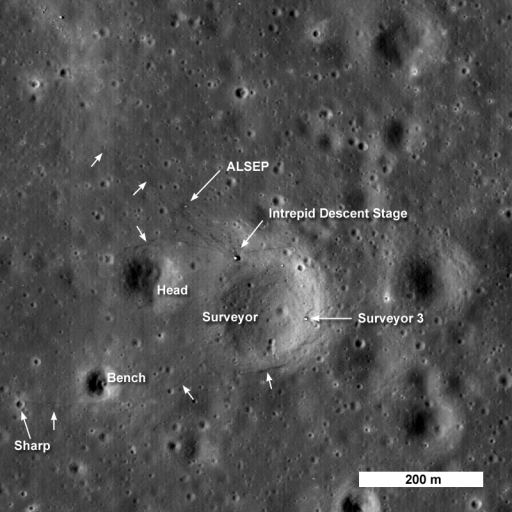 As Surveyor 3 came in for a soft landing on the Moon, one of its thrusters didn't turn off at the proper time; as a result the spacecraft bounced several times before it came to rest at 3.01 S, 336.66 E. The last little bounce produced the imprint above the footpad in the center of this panorama. The first bounce was over the ridge and was not visible to Surveyor's camera. A scoop was used to scuff the soil -- the first use of a robotic arm on another world. The camera took more than 6,300 images. Unfortunately, the images were severely compromised by the presence of dust on the mirror. This panorama was scanned from a photographic print of a hand-assembled mosaic, then digitally reconstructed and cleaned of visual defects by Philip Stooke.