There's a lovely new color HiRISE image of Spirit at Home Plate. It was captured on July 16 (sol 1,968), and Spirit is firmly entrenched at Troy, on the western side of Home Plate.

There's two things I like about this image: the colorful layering in the rocks, and the bright tracks that Spirit's balky wheel left behind in its travels. The soil is especially churned up on the north edge of Home Plate, where Spirit spent the last winter and then spent quite a while in futile attempts to ascend to the top of Home Plate. Here are three crops at different scales. The first one covers the area traversed by Spirit from the summit of Husband Hill to Home Plate; the second one includes Home Plate and environs; and the last is focused on Spirit and its recent tracks.

The HiRISE camera on Mars Reconnaissance Orbiter took another look at Spirit's parking spot at Home Plate on July 16, 2009. 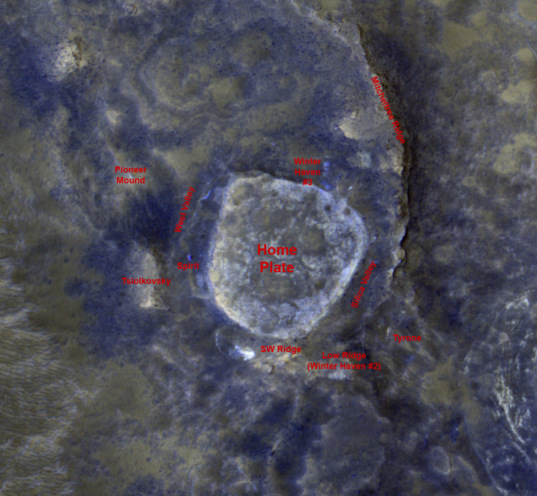 The HiRISE camera on Mars Reconnaissance Orbiter took another look at Spirit's parking spot at Home Plate on July 16, 2009.

Finally, a closeup view. Spirit is at lower left; Winter Haven number 3 is at upper right. The soil is all churned up up there. 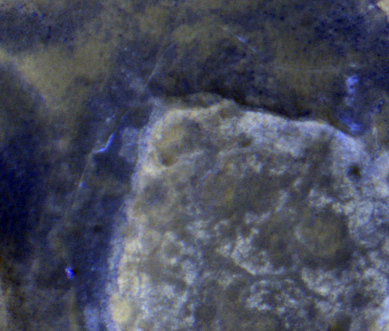 The HiRISE camera on Mars Reconnaissance Orbiter took another look at Spirit's parking spot at Home Plate on July 16, 2009. Spirit is at lower left, on the west side of Home Plate.

It still amazes me that we can spot that tiny little rover from another spacecraft orbiting another planet.

There was an enormous release of HiRISE images this week. I will hopefully find some time to go through and pick out some neat features to post. In the meantime, feel free to wander through the 1,500-plus new images on your own. It doesn't really matter which one you pick -- pick one at random and zoom all the way in, and you'll find wondrous landscapes.