Yesterday morning brought news of a relief in the weather for firefighters, and the staff at JPL returned to work. But it was a nail-biting time for those of us who have been monitoring the situation up on Mount Wilson, because live footage from news helicopters showed smoke billowing within meters of the domes and towers of the Observatory. 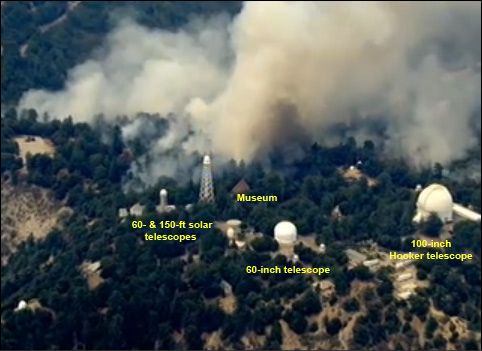 On the morning of September 1, 2009, while the Station fire raged in the Angeles National Forest, firefighters set backfires near the telescopes on the peak of Mount Wilson Observatory to consume fuel so that the wildfire would not reach it.
But the smoke was all from backfires -- small blazes set deliberately by firefighters to destroy accumulated fuel on the ground beneath the trees. Still I was glued to the helicopter's images. I took numerous screen caps and posted them to a photo album on Facebook. About midday yesterday the power evidently failed up there on the peak, which meant no more Webcam from the 150-foot solar observatory tower, and the web server that had hosted the Observatory director Hal McAlister's updates was also down. But McAlister quickly relocated to a server at his home institution, Georgia State University, where he's been posting further updates. His update from yesterday evening was particularly informative; I'll repost it here.

Tuesday, 1 Sep 09, 7:21 pm PDT - Much to report! I just got off the phone calling [CHARA site manager] Larry Webster's office on the mountain hoping to confirm his arrival. Instead of Larry, the phone was answered by LA County Deputy Fire Chief Jim Powers who is in charge of protection for structures at the Observatory. Wow, do I feel much better. First, Larry, [Mt. Wilson Observatory Superintendent] Dave Jurasevich and [engineer] John Harrigan arrived safely on site. When I identified myself, Chief Powers asked if I would like a briefing. You can imagine my answer. Here's what I know.

Fire fighters arrived earlier than I previously reported and by 8:00 am they had started their prep work. They began at the northeast corner of the Observatory using drip torches all along a line from that point traversing the northern perimeter to the boundary of the antenna areas. They are currently applying the same treatment to the east and southern boundaries of the site and expect to complete that this evening. These fires will clear ground debris and burn down slope with the intention of meeting any approaching fire with depleted fuel. Many of you watched the Super Scooper drop a major load of water, which was deposited downslope from the backfires and not on the Observatory grounds. That has been supplemented by other aerial tankers and helitankers for more precision dropping at crucial locations. The goal is to slow down encroaching fire, disperse it and make it more manageable.

Chief Powers expressed his absolute confidence that they will save the Observatory. He said that while it may have appeared over the last day or so that the Observatory was being neglected, that they never lost sight of the importance of Mount Wilson's preservation and it is now their highest priority. He flew up to the mountain yesterday, was delighted with what he found and knew they could achieve success here. There are now 150 fire fighters on Mount Wilson. Not only are the crews from Calaveras County (Cal Fire) back up there, but there are Los Angeles County fire fighters and even a crew from Helena, Montana. They have eight engines equipped to spray fire retardant on structures in addition to the crew engines. Chief Powers told me this army of fire fighters is "not going anywhere. They are very hard working and talented people who will get the job done."

After this uplifting briefing from Chief Powers, Dave called me from the CHARA conference room where he will be bunking down for the night. He filled in with some other information he'd learned from the Chief prior to my own briefing.

The fire is slowly coming up to the mountaintop through the canyon containing the remnants of the old Strain's Camp. Mountain water wells are located above the old tourist camping site. They are also anticipated as coming up the steep eastern canyon located between the Berkeley ISI facility and the CHARA machine shop - due east of the 100-inch telescope. The back fires will burn all the way down this canyon to disable this approach. Dave reported seeing fire on the way up at Eaton Saddle down towards Camp High Hill.

There is no structural damage on the mountain. A short in a pull box produced by old flimsy splicing was compromised by the back fires and power lost to the high pressure fire pump system. (We have also obviously lost our internet connection to the mountain.) John Harrigan and Larry Webster were shopping at "Mount Wilson Depot" - the electrical storage area in the 100-inch telescope building - for materials to construct a new power line to the fire pump building. This should present no difficulties at all for those guys.

Our facility is in great shape for defensibility and in the hands of a group of enthusiastic, highly experienced and absolutely devoted fire fighters. I want to acknowledge my predecessor Bob Jastrow for initiating a brush clearing program that we have continued, and I thank folks like the W. M. Keck Foundation for helping us a few years ago with funding for that activity. Chief Powers assured me that there is never a need to fully evacuate our site and it is essential that we leave knowledgeable personnel on site to assist them and ensure that our fire fighting and support infrastructure is functional. "They are as essential to your protection as smoke alarms," Chief Powers said. That makes me feel so much better about letting Dave, Larry and John go back on site.

Hearing the absolute confidence and expertise in Chief Powers' voice has given me great optimism for, what the Chief said himself, would be "another hundred years for Mount Wilson Observatory." The fire is not yet totally out, and in fact is still apparently moving rather fast to the southeast, south of Mount Wilson, still encroaching on neighborhoods in northern Pasadena and Altadena. They still think it'll take another two weeks to completely contain it. But it seems Mount Wilson is in good hands.

This will probably be my last update on the fire up there, and I'll also give Twitter and Facebook a rest on the subject. There's stuff going on in space!