Planetary Radio Q and A: How do you make a mark on a planet made of gas?

This week's Planetary Radio features Linda Spilker on the current status of the Cassini mission and what it's been doing with equinox observations. On "Questions and Answers" I answered the question:"How could an asteroid make such a big mark on Jupiter when it doesn't have a solid surface to make a crater in?"

I cribbed some of my answer from Phil Plait's blog entry on the subject. 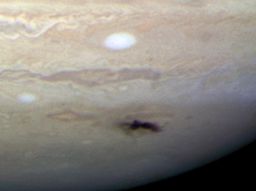 The Hubble Space Telescope turned its newly installed Wide Field Camera 3 toward Jupiter on July 23, 2009 to capture this natural color image of the impact feature that was first observed near the south pole on July 18. The impact mark is a dark spot and has been stirred around by Jupiter's atmospheric turbulence.
When a small object smashed in to Jupiter on July 19, 2009, it left a dark mark near the giant planet's south pole. The mark was the size of Earth, yet the object that hit Jupiter was likely only around a kilometer across. How could such a tiny body make a big mark in a gassy planet?

To understand the answer, you need to know what happens when an asteroid comes in for a crash. First of all, it arrives at an incredibly high speed, about 100 kilometers a second. The impact speed is much faster for Jupiter than for Earth, because Jupiter's gargantuan gravity accelerates incoming bodies to much higher speeds. As the rock rockets downward, it compresses the gas in front of it. Just as a bicycle pump heats when you use it to compress Earth's air, the air in front of the asteroid heats, but because the speed is so high, the pressure is enormous, and the air heats to thousands of degrees.

Soon the rock explodes. It vaporizes, contributing its elements to Jupiter's clouds, but the huge planet hardly notices. What it does notice is the splash. Fiery-hot gases fly in all directions from the impact, especially upward through the transient hole left in the atmosphere by the incoming fireball. This rebound brings up copious amounts of ammonia from deeper in the planet, which is responsible in part for the dark color of the impact mark.