I am so sorry it's taken me so long to sit down and write about some of the amazing images being returned from the Moon by Lunar Reconnaissance Orbiter. The Lunar Reconnaissance Orbiter Camera or LROC is the sharpest camera ever sent to lunar orbit -- the only higher-resolution photos to have been returned from the Moon came from the spacecraft (and people!) that landed on it. There really isn't anything that compares to LROC except HiRISE at Mars.

Let's get straight to an image. Tempting as it is to ooh and aah over the photos that LROC has shot of Apollo hardware, I think I'm going to skip over that and go for some cool geology. Feast your eyes on this: 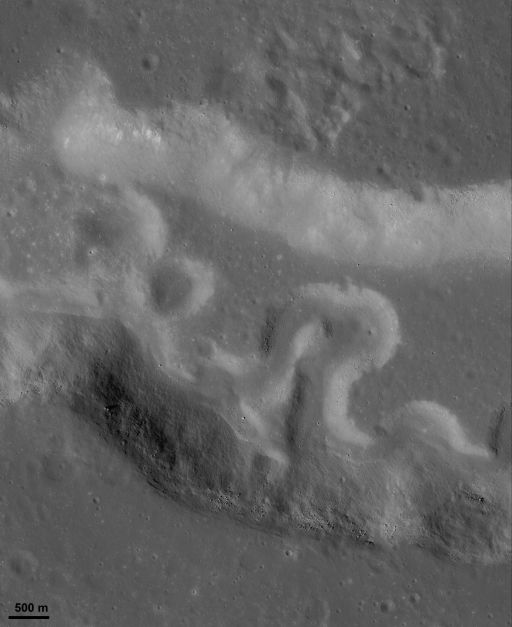 Rille within a rille

Vallis Schröteri, the largest rille on the Moon, originates on the Aristarchus Plateau. The channel actually contains two rilles, a larger one 4.3 kilometers wide and 155 kilometers long, and a narrower, inner one 600 meters wide and 204 kilometers long. The geologic complexity of Aristarchus Plateau and its rich, easily accessible deposits of potential resources make it an exciting landing site for future human exploration missions. This photo was captured by Lunar Reconnaissance Orbiter on August 14 at 00:18 UTC and has a resolution of 1.46 meters per pixel.
This looks for all the world like a river valley on the Moon. And it is, sort of; a fluid did carve these features but I don't think you'll find any lunar geologist who will argue today that water ever flowed on the Moon (unlike on Mars). These channels are called "sinuous rilles," one of my favorite geomorphological terms; the term originated in Coleridge's poem Kubla Khan.

Within the banks of sinuous rilles, fluid lava once flowed, long ago when the Moon was a volcanically active place. In fact, this image contains evidence for two distinct episodes of volcanism. The rille that meanders across the center is about 500 meters wide, but it's meandering within a valley that is itself a much larger rille, several kilometers wide. The whole system is called Vallis Schröteri.

Although it's no longer debated that rilles resulted from volcanism, there's still a lot of debate as to whether they are primarily constructional or erosional features. On Earth, lava channels primarily form when a voluminous, fluid eruption forms a crust at its edges (where it's cooled most rapidly) and eventually over the top, creating a lava tube. Such closed tubes insulate the liquid lava inside, allowing it to run fluidly for many kilometers. As the eruption peters out, the roof of the tube is no longer supported by lava inside, and may collapse, creating the open channels we now see.

But some scientists argue that rilles are less like Earth lava tubes and more like an Earth river, formed when a turbulent liquid erodes into the ground, carving out a channel. I think, but am not certain, that one piece of evidence cited for the erosional model is the kind of meander shape you can see in the image I posted above. Meanders are common features in Earth river systems; they take a long time to form as differential flow speeds of the fluid around small bends result in deposition of material on inside curves (where the flow is slower) and erosion on outside curves (where it's faster). Given enough time, two bends can migrate toward each other and then merge, straightening the river channel and cutting off an "oxbow" lake -- that appears to have happened at the meander at the center of this image. Can this process operate inside lava tubes? Frankly, I don't know. According to the caption accompanying this image release, this is one of the mysteries that LRO scientists hope to solve.

There are beautiful things to see if you zoom in on this image. I love all the little boulders, each casting a shadow; boulders that sit on slopes facing away from the Sun (which is coming from the left) have especially long shadows, creating the illusion that they're particularly tall. Here's a little snippet of the image at its full resolution of roughly 1.5 meters per pixel. A good rule of thumb is that the smallest things you can see in a picture are roughly three times the size of one pixel, so the smallest visible boulders are roughly four meters across, which I guess is about the size of an SUV. The long shadows on the slopes make slightly smaller things visible. But as I was looking around at the different-sized boulders I suddenly noticed a long track going down the sloping wall of the outer rille. It's continuous at the top of the slope, discontinuous toward the base. Is this the track left by a boulder that first rolled, then, as it picked up speed, bounced down the slope? Or is it a line of collapse pits caused by a fracture through the slope? If it's a bouncing boulder track, well, cooool. I had hoped to have a scientist weigh in on this interpretation but I've contacted three members of the LROC science team in the last week and haven't gotten any reply from anybody, so I guess I'm on my own! 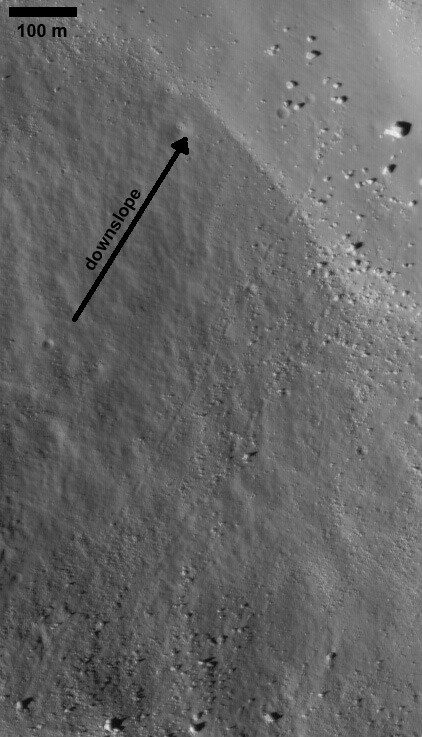 Bouncing boulder track on the Moon?

Toward the top of the image, the terrain is your basic cratered lunar highlands, which allows me to illustrate something interesting (and sometimes challenging, sometimes helpful) about the Moon:

These four snapshots of cratered terrain in the lunar highlands were cropped from an unremarkable section of the "Rille within a rille" image.
This image contains four tiles. Would you believe that we are looking at the same piece of terrain at four different scales? The upper left image is at 12 meters per pixel; upper right, 6; lower left, 3; lower right, 1.5. Each tile is the lower right quadrant of the preceding one, enlarged 200%. The first three tiles are basically indistinguishable even though they are actually different scales. The last one looks slightly blurrier because, I think, we are at the resolution limit of the camera -- you're seeing the way details spread across more than one pixel. At the high resolution of LROC, the appearance of some highland lunar cratered terrain is largely independent of scale -- in other words, it's fractal. Crater saturation and the scale-independence of cratered terrain is one of the things Benoit Mandelbrot wrote about in his book The Fractal Geometry of Nature. Of course, nature never quite perfectly matches mathematical models, and determining the ways in which size-frequency distributions of craters depart from a perfect scale-independence -- and what causes those departures -- is one of the basic tools of the lunar geologist.

Many congratulations to the LROC team for what is obviously an excellent instrument! And we ain't seen nothing yet -- the spacecraft isn't even done with commissioning, and won't settle into its lower science orbit until mid-September. I'm looking forward to many hours staring at LROC photos.

A little plea for help: my understanding of lunar geology is not particularly deep. Are there any scientists out there who'd be willing to answer some occasional questions from me on lunar geology and whether my interpretations are correct?