The July-August 2009 issue of The Planetary Report is out, with Buzz Aldrin

The latest issue of The Planetary Report has just been posted to the For Members section in PDF format; non-members can view the table of contents and read Charlene Anderson's editorial here, or can join the Society if you'd like to read the full issue! The big feature article in this issue is "Beyond Apollo: Where Next in Space?", by Buzz Aldrin (yes, that Buzz Aldrin) and Lou Friedman. Another article, by Bruce Betts, describes the status of the Phobos LIFE project -- in a nutshell, the hardware is built, has been filled with all its little microbes, has been delivered, and is ready for launch aboard Phobos-Grunt. A third feature, by exoplanet astronomer Debra Fischer, reports on the increasing diversity to be found among planetary systems surrounding other stars.

I don't say this as often as I should, but The Planetary Society is an organization formed of people across the world who believe in the value of space exploration and the search for life elsewhere in the universe. We're not funded by any government or private company; we're a nonprofit whose funds come almost entirely from the tens of thousands of individuals who pay annual dues to belong to this organization. If you identify with people who want to explore our solar system and discover strange new worlds, perhaps you should think about joining. For the cost of a magazine subscription you do get our bimonthly magazine, plus you help to fund projects like Phobos LIFE and the other work that the Society does to educate and inform the public -- and that includes me. Please join or donate if you support what we're doing! And to all of you readers who are members, I am very grateful for your support. I'm always tickled to receive emails from members, and am continuously surprised by the number of you who tell me you've been members for twenty or more years. 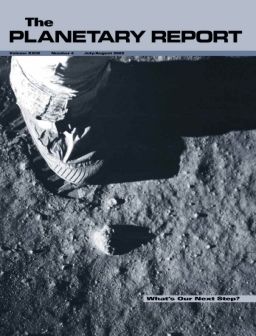 On the cover: Forty years have passed since human beings first walked on the surface of the Moon. This is astronaut Buzz Aldrin's boot, creating what would become one of the most iconic images of the 20th century -- a human footprint in the grainy soil of another world.