Planetary Radio Q and A: What's Jupiter made of?

This week's Planetary Radio features astronomer Heidi Hammel on the recent impact on Jupiter, so go check it out! Each week on Planetary Radio, I do a "Questions and Answers" segment, and I've recently decided to start posting the text of my Q and As, in part so I can give proper credit to the people from whom I crib material.

This week's Q: "I've heard Jupiter called a 'failed star' because it's made mostly of hydrogen. What is it made of, other than hydrogen?"

My answer is taken in large part from a fine astronomy textbook, The Cosmic Perspective, by Bennett, Donahue, Schneider, and Voit: 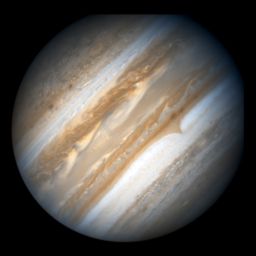 The Hubble Space Telescope took this photo of Jupiter in support of the New Horizons flyby on Feburary 17, 2007 using the Wide Field Planetary Camera 2.
Like all the planets, Jupiter condensed from the same nebula of gas and dust that the Sun did, so it started out with a complement of chemical elements similar to the Sun: mostly hydrogen, some helium, and trace amounts of everything else. Unlike the other planets, though, Jupiter is massive enough that it's been able to hang on to the lion's share of the atoms it began with. As a result, it is the planet that has the most sunlike composition. It is seventy-five percent hydrogen and twenty-four percent helium. The remaining one percent is dominated by relatively light elements like carbon and nitrogen. We can only see the uppermost levels of Jupiter's atmosphere, where the pressures and temperatures are similar to those in Earth's atmosphere, so Jupiter's clouds are actually made of materials that are pretty familiar. Some of the clouds are made of water ice, just like on Earth. At slightly higher altitudes than the water ice clouds, Jupiter's atmosphere gets cold enough that ammonium hydrosulfide and ammonia can condense, so Jupiter's clouds may have different compositions at different altitudes. Also just as on Earth, there are very minor amounts of more complex compounds, like acetylene, ethane, propane, and other hydrocarbons. Although they make up a tiny fraction of Jupiter's clouds, it's the hydrogen and nitrogen compounds that are responsible for their glorious colors. Deep within Jupiter, conditions become much less familiar. Tune in next week to find out more.