Light bounces around the Saturn system in strange ways. The Sun is the only light source, but incoming sunlight strikes Saturn and its rings and its moons and bounces off to illuminate areas of Saturn and its rings and its moons that would otherwise be dark. In particular, Saturnshine and ringshine have been useful to Cassini's efforts to image areas of moons that would otherwise have been in the dark.

Here's a nice color image captured during Cassini's prime mission to Saturn that illustrates how much ringshine was bouncing around the Saturn system then. Anyone floating among Saturn's cloud tops during the night on Saturn would be dazzled by the arc of brilliant rings overhead, and would surely have enough light to see by. (This is one of many spectacular color composites of Cassini images produced by Gordan Ugarkovic.) 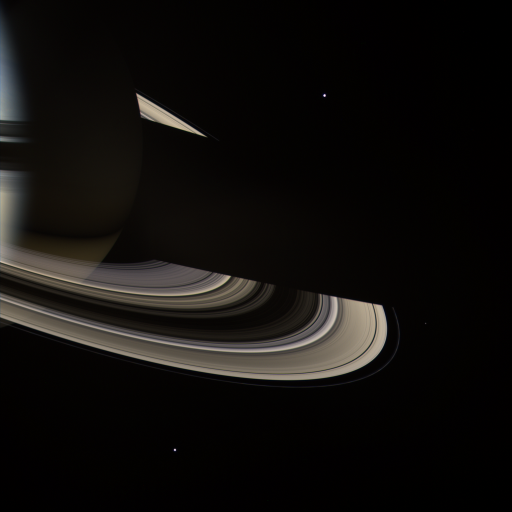 The 'dark side' of Saturn

This approximate true color view of the night side of Saturn was captured by Cassini on May 19, 2007. It shows how Saturn's night side is brightly illuminated by reflected light from Saturn's rings. Sunlight is incident on the south (bottom) side of the rings, so the strongest illumination from ringshine is on the southern hemisphere of Saturn. The reflection goes to a minimum near the equator, where the effective area of the rings goes to zero (because they are so thin). There is also weaker ringshine lightening the northern hemisphere night side because the rings are partially transparent; light there has been scattered through the rings and bounces northward to Saturn. At the extreme left of the image daylight is illuminating Saturn's globe, and the rings casting shadows onto its blue northern hemisphere. Three moons are visible in this view: clockwise from the top, they are Enceladus, Epimetheus, and Mimas.
The shifting of the seasons has changed everything about lighting conditions at Saturn, however. Now that the Sun is passing through the ring plane, there is almost no sunlight directly incident on the rings. Under these conditions, the rings should be almost completely dark, and it's true they are very dark. Except that there's another large, reflective object in the Saturn system that bounces light around, namely Saturn itself. Ordinarily, sunlight incident on Saturn's rings is far brighter than Saturnshine, so you don't notice this effect, but with the rings so dark right now you can easily see that they appear brightest where they are between Saturn and the Sun. Here's an illustration by Björn Jónsson showing how you'd expect the main A, B, and C rings to appear, under these conditions: 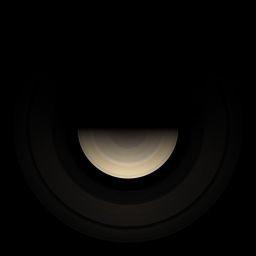 This simulation of Saturn from a viewpoint above the north pole on August 11, 2009 shows how the rings are illuminated by Saturnshine. They are brightest sunward of Saturn.
A look at the latest raw images from Saturn clearly shows how the rings are brightest sunward of Saturn. Since these three images had different exposure settings and are from the raw website I made no attempt to match their levels from frame to frame -- hopefully that's not too confusing. There is one major point of departure between the real images and Bjorn's simulated ones, which is the F ring. The F ring is the wispy, braided strand that orbits just outside the main rings, and is darker than the main rings when everything is nicely illuminated by sunlight. But now, as the main rings are nearly black, the F ring is still quite bright to Cassini, because of the way the sunlight, coming in from behind the F ring as seen from Cassini, is scattered forward off the sparse, dusty particles to Cassini's cameras. 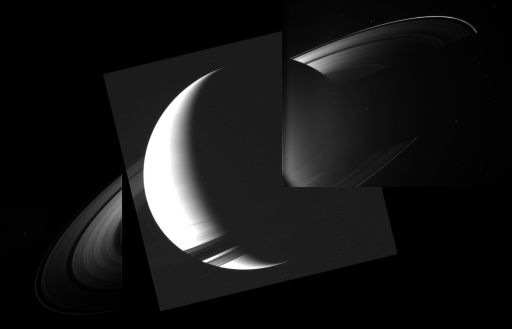 Saturnshine on the rings near equinox

Three images from Cassini's raw images website illustrate how Saturnshine was the brightest light source on the rings just a few days before equinox. The three images were taken on August 4, 2009, from a distance of about 2.2 million kilometers and on the night side of Saturn, north of the ring plane. The two frames taken of the rings clearly show that they are brightest where Saturnlight is reflected onto them. In the center frame, the rings cast almost no shadow onto the planet -- their shadow is the thinnest of dark lines near the equator. Oddly, the outer F ring is the brightest of all, because its sparse particles are forward-scattering light to Cassini's cameras.
One of the funkiest things about the current importance of Saturnshine for the apparent brightness of the rings is how it affects shadows being cast by the moons onto the rings. Here's an image that's fairly straightforward to interpret, taken a few months ago from the sunlit side of the rings. We see Mimas' shadow crossing the F and outermost A rings (Mimas is not visible). The areas in Mimas' shadow are not totally black because they're receiving Saturnlight. 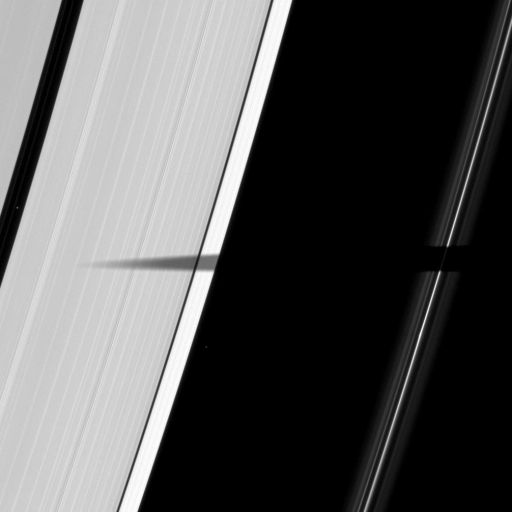 As Saturn approached its August 11, 2009 equinox, the moons cast shadows onto the rings. This shadow is of Mimas, captured by Cassini on April 7, 2009. The shadow crosses the F ring (right) and the outer half of the A ring including the Keeler gap (center). The shadow is not completely black because Saturnlight is illuminating the areas shadowed by Mimas.
But here's an image that is brain-bending. It's been featured on the blog before, in Dave Seal's guest entry on the approaching equinox. 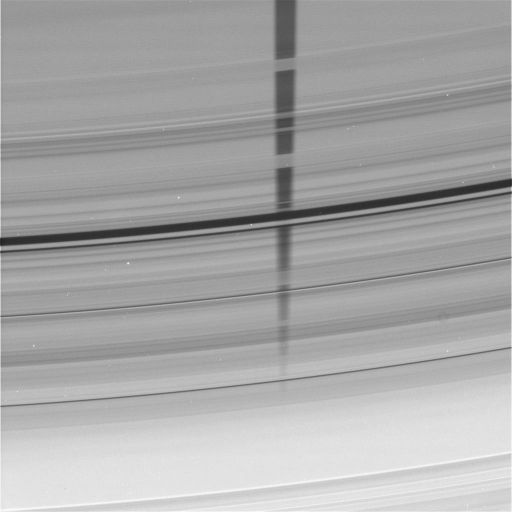 Shadow of a moon onto Saturn's main rings, showing portions seemingly defying the laws of physics and refusing to be shadowed.
As Dave explained, it's the combination of Saturnshine and varying ring transparency that's making this weird shadow-no-shadow phenomenon. The key fact is that we are looking at the north side of the rings; remember that until tomorrow, the Sun is incident on the south or back side. That means that the shadow is also incident on the back of the rings. We wouldn't be able to see any of the shadow if it weren't for the fact that the rings are semi-transparent in some places. The shadow is visible where the rings are semi-transparent. Where we can't see shadow, the rings are denser. In all locations, the light on the rings is mostly Saturnshine, not sunshine.

If you couldn't follow that, don't worry. Just look at the photo and allow yourself to be amazed. Sometimes I find myself thinking too much and have to exert effort to step back and just be amazed by what we're seeing.

Here's one last amazing pic, on the topic of Saturnshine and moon shadows. 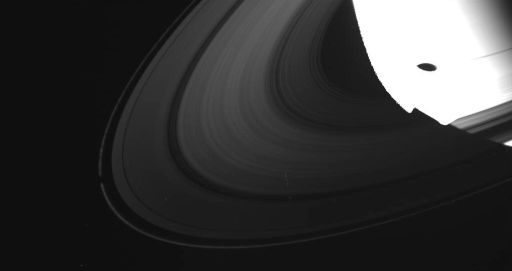 Titan's shadow on Saturn near equinox

This photo was taken by Cassini on August 4, 2009, just a week before Saturn's equinox. Sunlight strikes Saturn's rings almost perfectly edge-on, making their shadow on Saturn an incredibly thin line along the equator. The rings are dark, illuminated almost only by light reflected off of Saturn, except for the F ring, whose dusty particles scatter light to Cassini's cameras. The shadow of Titan crosses the rings and forms a dark blob on Saturn's equator. Because the rings are lit by Saturnshine, not sunshine, Titan's shadow isn't visible on the ring system except where it crosses the F ring, which is lit up by sunlight. A relatively long exposure was required to capture detail in the rings, so Saturn's sunlit areas are overexposed; some "pixel bleeding" results from the overexposure.