"My First Reaction Was to Look Away From It....It Was Too Beautiful"

Seeing our home planet from space is something that only a few hundred of our entire species have had the privilege of doing. And only a select fraction of those have had the experience of actually seeing the planetary panorama laid out before their feet as they space walk, without the encumbrance of spacecraft walls and windows obstructing the vista.

It's always frustrated me that returning astronauts rarely write about the view of Earth they've seen. Don't get me wrong, I often hear or read astronauts say it's a fantastic or awesome sight, but it's rare to read or even hear a vivid description of what it actually looks like.

I recall that when I interviewed to become a mission specialist, I asked Gemini, Apollo, and Shuttle commander John Young over a beer what was the most surprising thing he could remember about the view on his first space flight. He told me: "It was so bright out there, as bright as any day you'd ever see in the Mojave." John's description added a realism to the experience that I'd never seen written down before, as did Shuttle astronaut Joe Allen's description of flying over Texas and seeing I-10 not as the flat highway he knew from the ground or an airplane, but as an ever so thin, but curved ribbon of cement arcing over a spherical planet. 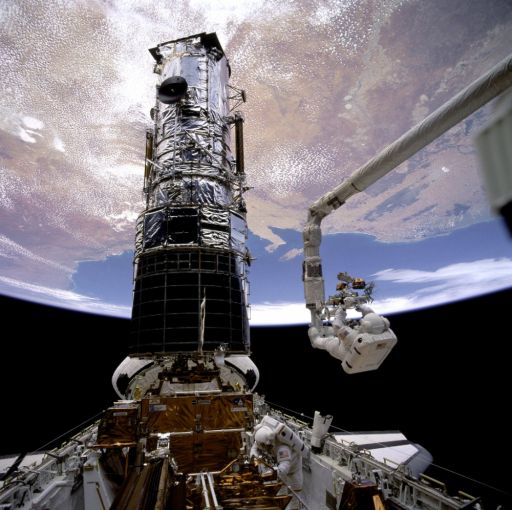 The View from Space

ur home planet from space: a view that apparently no image can really capture, and a view more people should see for themselves.
any times since then, I've tried to picture the view from orbit in my mind's eye. And when I have, I imagine the Earth as in scale model, as if orbital altitude were the height of my eyes off the ground. Doing the math from Hubble's 350 mile high perch, that would make the Earth the equivalent of a roughly 125 foot diameter ball I am standing on, drenched in bright blues and greens and tans, and revealed in full 3-D, with clouds floating down at ankle level and most mountains protruding no higher than half an inch above the land and water, all of it a vast scale model of the geography we learn in books. I also try to imagine the texture of the ocean and the land, and crisscrossed network of aircraft contrails far below, along with distant aurora, rainstorms, and rainbows. I try to imagine gliding slowly by over Earth's bejeweled creation, with a view that stretches over 1500 miles in every direction. I image the eye-popping colors that must result from seeing this all through crystal clear vacuum -- which must render it ever so differently from the view from aircraft cockpits I have flown in high in the still-blue stratosphere at almost 60,000 feet.

But no matter, every time I try this, I know the reality must be as different as my mind's image of someone speaking to me by phone versus the reality of seeing them in person, or the difference between a panoramic photo montage taken atop a mountain versus the sweeping 3-D landscape one drinks in from being at the summit.

Ever since I was a boy, I wanted to hear a space traveler describe the experience of seeing the Earth from space in vivid terms. But despite knowing dozens of space travelers, I've near heard it very well described -- though occasionally gets glimpses of it , like the ones that John Young and Joe Allen provided. Sadly, instead, the conversation usually is short on details and ends with something like, "You just have to see it yourself -- it's indescribable" -- which I find to be both endlessly seductive and yet maddeningly frustrating.

But this week, in a few sentences that Hubble spacewalker Mike Massimino radioed down from orbit after working outside on EVA this past Saturday, I finally understood why it's always been this way.

Mike's (we interviewed together to be mission specialists) words were reported in Space.com. I can't get them out of my mind. So I thought I'd share them with you here, because I finally found in them some solace as to why it's been so hard for astronauts to capture the scope of what they have seen for the rest of us. Here's what Massimino said:"I felt like I was almost looking at a secret... that humans weren't supposed to see this....It's too beautiful. ...It was like looking into absolute paradise. My first reaction was to look away from it. ....I actually turned my head. I thought, I'm not supposed to be looking at this. This was too much to see."

In those sentences, I came to understand the magnitude of how simply beyond normal human experience, how beyond words, how much larger than life, the vast panorama of Earth from low Earth orbit must be.

Of course, even though I now can better understand why it's so hard to describe the view from that privileged perch, I'm still not satisfied and probably won't be until I can see it for myself.

So I'm looking forward to the dawn of suborbital travel opening up this view to so many more of us. And not by the hundreds, but by the thousands and thousands who will see it in the 20-teens for themselves, simply because they choose to. Perhaps among those who fly in such large numbers will be a few who can describe what they see with justice.

Will you go and see it for yourself when flights begin, as I will? And if you do, will you try to write about it for everyone else?