So far so good. It's 2 down and 3 to go for the crew of Atlantis

The astronauts have accomplished all their assigned objectives during the first two spacewalks. But in keeping with Hubble hugging history, the telescope threw them a few curve balls and made them work extra hard during these first two EVA's, both of which had to be extended to complete all the difficult tasks. Not even the repair operations considered to be more routine, were in fact easy but they achieved everything asked so far. 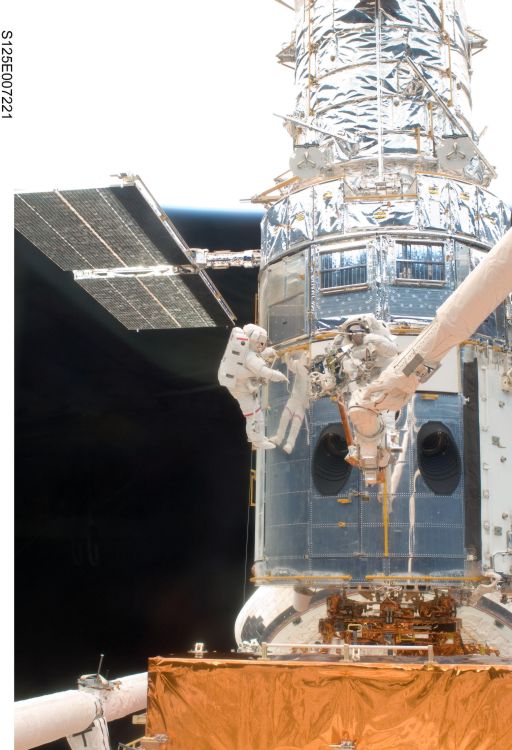 hat appears to be a number of astronauts, because of the shiny mirror-like surface of the temporarily-captured Hubble Space Telescope, is actually only two -- astronauts John Grunsfeld (left) and Andew Feustel. The mission specialists are performing the first of five STS-125 spacewalks and the first of three for this duo.
VA 2 was extended from a nominal six and one half hours to 7 hours, 56-minutes, making it the 8th longest spacewalk in history. During todays walk outside the shuttle, Massimino and Good removed and replaced all 6 gyroscopes which stabilize, point and lock the telescope onto the desired targets. The gyros are packed in pairs of two inside rectangular boxes known as rate sensor units (RSU's).

All three RSU boxes holding the six gyroscopes were replaced. But one of the new state of the art units could not be seated properly into place and caused the astronauts to fall nearly 90 minutes behind schedule. As a result, the spacewalkers were instructed by NASA to install a refurbished spare unit brought along on Atlantis as back up just in case. The space unit is comprised of refurbished parts rebuilt from earlier units removed from Hubble on the 1999 servicing mission and will not hinder operations NASA says.

For most of its lifetime Hubble was operating on 3 of the 6 gyroscopes with the others held in reserve for redundancy. But more recently, Hubble was switched to a 2 gyro mode to conserve the remaining gyros as long as possible after 3 of the gyros failed and a fourth is exhibiting anomalous behavior. This plan was devised in hopes of maximizing Hubble's lifetime.

The spacewalkers also replaced a new battery module from the telescope's Bay 2 which is about 36 x 36 x 10 inches in size and weighs about 475 pounds. These are the original batteries launched with Hubble in 1990 and have not been replaced. A second battery module will be replaced on an upcoming EVA. The batteries are far beyond their original design lifetime and are operating at half their capacity. During my chat with Ed Weiler he told me, "They have functioned well but we felt it wise to replace them on this last mission. Given their longevity it's unlikely they will be the cause of Hubble's ultimate doom."

Replacing the gyroscopes and batteries is the top priority of the mission and absolutely essential for the continued operation and extending the lifetime of Hubble.

The astronauts encountered great difficulty in removing a critical bolt holding the instrument in place which could have completely prevented the removal of WFPC2. After numerous tries with his custom designed toolkit, Astronaut Feustel eventually used elbow grease on his socket in a dramatic last ditch effort to unlatch the bolt and save the day. The remaining work to swap the cameras proceeded perfectly.

Today I participated in a media tour of NASA's soon to launch Lunar Reconnaisaence Orbiter (LRO) which I'll report on soon. In a few days I'll be presenting lectures here in Florida on NASA's solar system exploration missions, one of which will be attended by the parents of one of the astronauts. 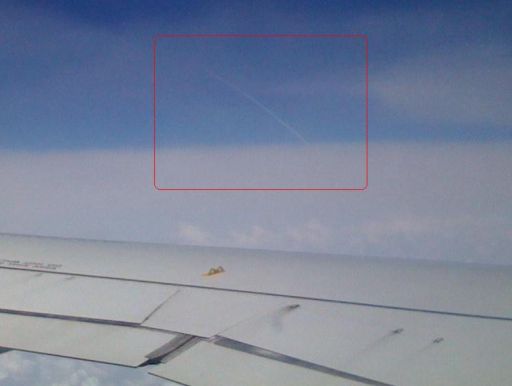 Atlantis Seen from a Plane

tlantis punches through the cloud layers on May 11. As I observed Atlantis launch from the KSC press center, my brother coincidentally observed Atlantis accelerating to orbit from above while sitting inside a United Airlines jetliner landing at Orlando Airport and snapped this photo from an IPhone.