It's a beautiful morning for a launch here at the Kennedy Space Center.

Fueling has begun of Atlantis External Tank (ET) tank. The Mission Management Team met shortly after 4 AM EDT and gave the "go-ahead" for fueling. The propellant transfer lines have been chilled down, fuel is flowing and the countdown clock is ticking.

At 4:41 AM the NASA team opened the valves and began loading the 154 ft long ET with about 500,000 gallons of the cryogenic propellants: supercold liquid oxygen (LOX) and liquid hydrogen (LH2 ) from storage tanks at the pad. The "tanking" process to achieve the flight load takes about three hours and is nearly complete as of 7:15 AM. Thereafter it will be replenished as needed. The final inspection team will then proceed to the pad. The cryogenic propellents fuel the orbiters three main engines (SSME's) during liftoff and ascent for the 8 and a half minute climb to orbit.

Crew Wake-up occurred at 5:30 AM and the astronauts underwent final medical exams. They depart for the launch pad at 10:16 AM and board the orbiter about 30 minutes later. Liftoff remains targeted for 2:01 p.m. EDT. Weather remains at 90 percent favorable. 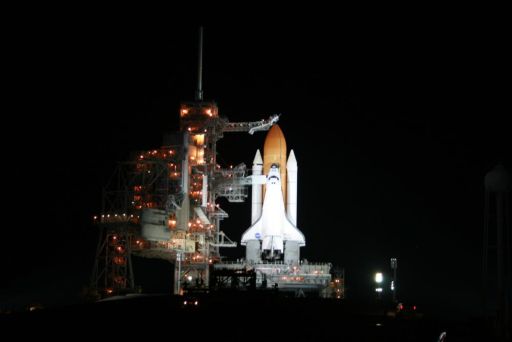 ryogenic Fueling of Space Shuttle Atlantis has started at Launch Pad 39 A on the morning of May 11, 2009. Hubble will be flying over KSC at launch time.