Space Shuttle Atlantis has been exposed for flight on Sunday evening May 10 after the retraction of the Rotation Service Structure (RSS). I am reporting directly from just outside the perimeter security fence at Launch Pad 39 A at the Kennedy Space Center on a glorious but steamy Florida afternoon with not a cloud in the sky. Starting at about 5:20 PM the press contingent witnessed the start of the RSS retraction by the NASA launch pad staff. It took about 25 minutes for the massive structure to pivot 120 degrees away from the orbiter and into its launch position. 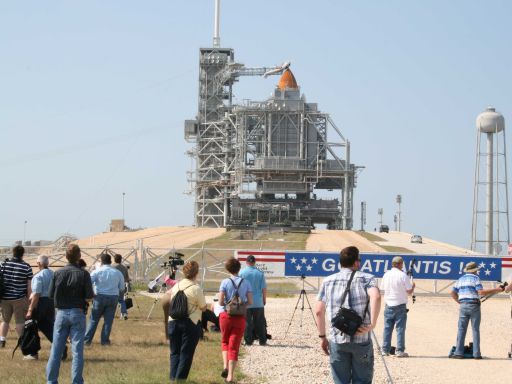 e await the start of retraction of the protective Rotating Service Structure (RSS) at Pad 39 A at KSC on May 10, 2009
he 130-foot-high RSS encircles the orbiter, providing weather protection and work access to the orbiter for change-out and servicing of the Hubble payload in the payload bay. Platforms at five levels provide access to the science instruments and payload support equipment at the pad with the payload bay doors open in the environmentally controlled Payload Change-out Room. 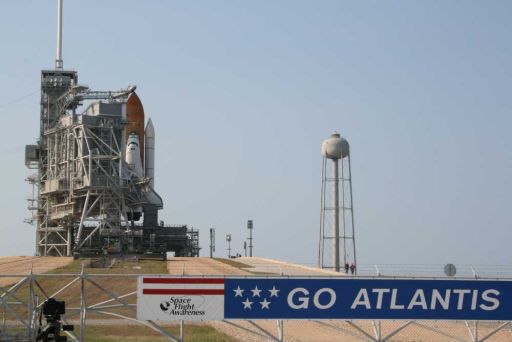 tlantis begins to reveal herself about 10 minutes into RSS retraction.
e watched as the twilight sun set behind the shuttle and 5 clusters of Xenon high intensity searchlights (40 lights total) surrounding the pad were gradually lit to bathe the orbiter in a distinctive glow. 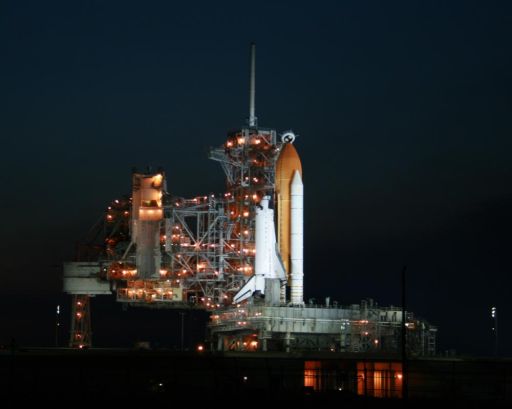 pace Shuttle Atlantis at dusk at Launch Pad 39 A, RSS retracted at left. Less than 16 hours from launch to save the iconic Hubble Space Telescope.
t this morning's Countdown status briefing, NASA Test Director Charlie Blackwell-Thompson said that the countdown timeline is on target and "After many months of preparation, Atlantis is ready to fly. It's a very busy mission as we refurbish, renew and restore the Hubble Space Telescope. We at NASA are looking forward to sharing the wonders of space for many years to come". Debbie Hahn, STS-125 payload manager, said that "All Hubble hardware has been closed out and the payloads are ready for flight. None of the payloads are powered for launch".

The Hubble Space Telescope will be flying directly over the Kennedy Space Center if Atlantis launches as scheduled at 2:01 PM on May 11. Shuttle Weather Officer Kathy Winters said the weather forecast has improved to "90% Go" for Monday. In the event of a delay, the weather outlook is reduced to "60% Go" on Tuesday and Wednesday with a threat of thunderstorms moving in. 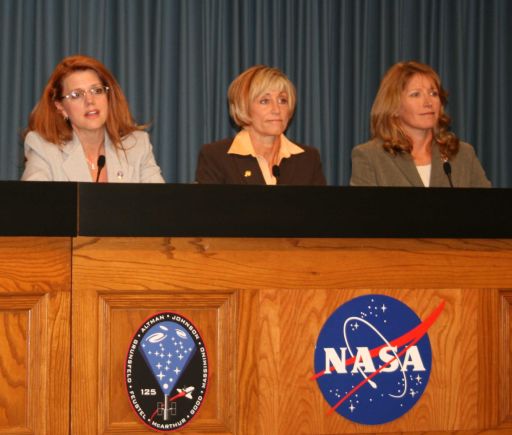 t May 10 KSC Press Briefing, the Atlantis orbiter, Hubble instrument payload and weather outlook are all declared "Go" for launch in less than 24 hours by Charlie Blackwell-Thompson (left), Debbie Hahn and Kathy Winters.
he clock is ticking away towards Mondays launch with cryogenic fueling set to start in less than 2 hours. This morning, STS-125 Commander Scott Altman and Pilot Gregory C. Johnson once again practiced landings in the Shuttle Training Aircraft as the entire crew readies for their mission. 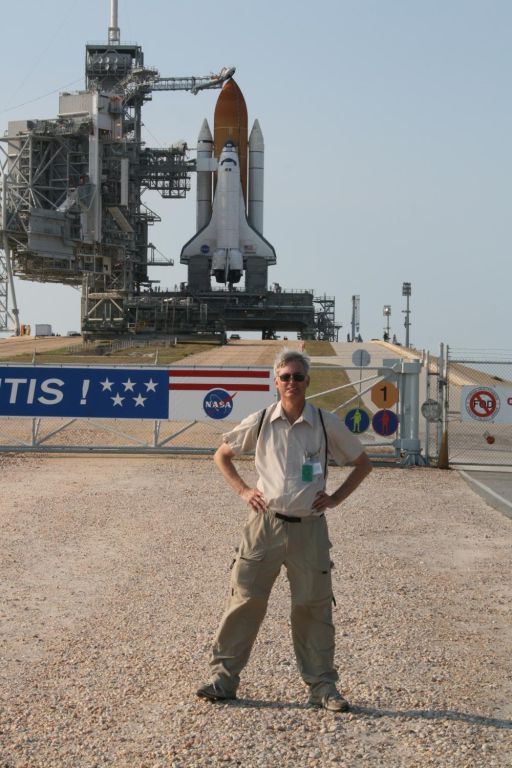 en Kremer and Atlantis at Launch Pad 39 A after RSS retraction completed.