Today (Saturday, May 9) was an action packed and incredibly exciting day here at the Cape and KSC Press Center with launch briefings and a press tour inside the Vehicle Assembly Building (VAB) to view segments of the new Ares rocket for Project Constellation. Then, more briefings on LRO and LCROSS and the Imax Cameras which will film portions of the spacewalks in 3 D. More on some of these topics in follow-up reports.

All this set against a backdrop of two Space Shuttle's standing proud and ready at Launch Pads 39 A and 39 B. The pride and excitement of the team is palpable at KSC on this beautifully sky blue day as the excitement builds towards launch.

I can report from KSC that the countdown to Monday's launch of STS-125 continues to go "extremely well". At this evening's pre-launch press briefing, Mike Moses, chair of the Mission Management team (MMT) stated that "the team gave unanimous approval for a go for launch" and to continue with launch preparations. Simultaneously, astronaut crew members were flying above us in the Shuttle Training Aircraft (STA) as they continue practicing landing attempts.

Launch Director Mike Leinbach confirmed, "We are right on our timeline. We are in the middle of our cryogenic loading for the fuel cell system and no issues to report there. A major milestone on Sunday afternoon at 5 PM is the rotating service structure gets retracted away from the vehicle. We begin our cryogenic loading of the External Tank (ET) at 4:41 AM Monday morning. The team is not tracking anything that would prevent an on time launch". 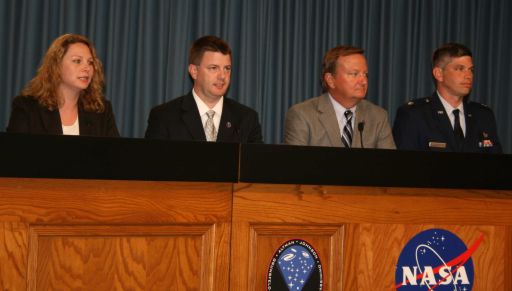 hairman of the Shuttle Mission Management Team chair, (2nd from left) announces unanimous "go" to proceed with launch at May 9 Press Briefing. Launch director Mike Leinbach confirms a smooth countdown so far.
he weather forecast remains at "80% favorable". NASA has three days in which to launch Atlantis until Wednesday May 13 before standing down due to a pre-existing military reservation to use the US Air Force Eastern Range for approximately one week. The range provides tracking and telemetry support for launches from Florida spaceports. Monday has the best weather forecast during the three day launch period. Otherwise the launch would be delayed to May 22 and the new batteries to be installed would be recharged in a process which requires several days.

Also today I was fortunate to conduct an in depth interview with Mark LaPole, Program manager for Hubble Instruments at Ball Aerospace, Boulder, Colorado. Ball has designed and built seven science instruments for Hubble, including the five working instruments aboard the observatory involved in replacement, repair and refurbishment on SM-4 (Servicing Mission 4) during the five upcoming, back to back and jam packed astronaut spacewalks.

All instrument work was funded by NASA and done in consultation with NASA, the science principal investigators and other scientists, engineers and contractors across the country. About a thousand people have worked on the instruments over the life of the program.

Ball's Hubble efforts started in 1976 with the Goddard High Resolution Spectrograph (GHRS), one of the original science instruments launched about HST, and then the Corrective Optics Space Telescope Axial Replacement (COSTAR) which was installed on the 1993 servicing mission and which compensated for the flaws in the primary mirror and enabled optimum performance of several science instruments.

For SM-4, Ball Aerospace built the new instruments, Wide Field Camera 3 (WFC3) and Cosmic Origins Spectrograph (COS). The overall instrument cost was almost $250 million. WFC3 cost $132 million and COS cost $88 million. The total cost of SM-4 is about $887 million.

STIS (Space Telescope Imaging Spectrograph) and NICMOS (Near-infrared Camera and Multi-object Spectrometer) were delivered on SM-2 in 1997 and ACS (Advanced Camera for Surveys) on SM-3B. The upgrade and repair to ACS involves a change out of the detector electronics. STIS had a power supply failure about 3 years ago. "Neither STIS nor ACS were designed to be replaced", LaPole said. "It's the first time we are basically opening the belly of an instrument and doing something like open heart surgery".

LaPole explained that, "The ACS task involves replacement of detector electronics for the wide field detector and we are adding a new power supply that will bring the entire ACS instrument back to life. Only 1 of 3 channels is currently working, the solar blind channel. The other two channels, the wide field and high resolution channels are not working because of partial failures in the power supply. The replacement part will restore the power to those two channels and to the new detector electronics". 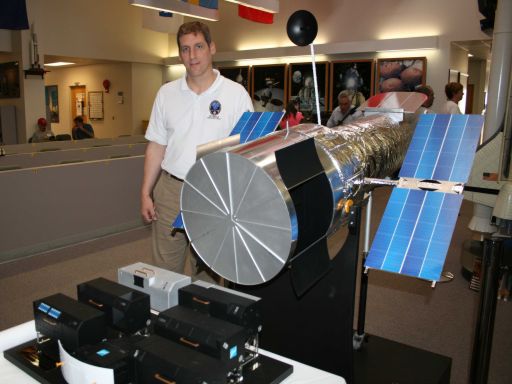 Model of the Hubble Space Telescope

odel of the Hubble Space Telescope at the KSC Press Center. Mark LaPole of Ball Aerospace explained to me how the Hubble instruments built by Ball will be installed by the STS-125 astronauts. Science instruments models in foreground.
quot;It's actually a very creative solution", Mark amplified. "We are using the upgraded replacement detector electronics to give us access to the instrument power cables so that a new external power supply can supply the entire ACS instrument".

"So the astronauts will pull out the wide field electronics and replace it with a new one. They will mount the new external power supply to the hand rail and then connect the new detector electronics. This will allow us to wake up and power everything"

"We will know within a few hours if the repair was successful while the astronauts are sleeping. We will then run functional tests to prove that it's actually working. If there are any problems then we will first have the astronauts attempt a visual checkout. So in effect we are replacing not what actually broke but something else to get around the problem", LaPole expanded.

The still functioning solar blind channel on ACS is an ultra violet (UV) imaging detector which conducts spectroscopy on stars and planets. Rather unexpectedly and in an unplanned mode, ACS detected an atmosphere on an exo-planet shortly before the instrument was crippled in 2007. "That's why there is such a great incentive to repair ACS", LaPole added.

The STIS repair is a direct replacement of the power supply which failed in orbit. "The astronauts will open the box facing them, remove the power supply circuit card which failed and then install a new one. The new instrument cover has many requirements such as sealing the cavity from electronic interference (EMI) and creating a thermal radiator to reject waste heat from the new power supply. To get the old cover off, the astronauts will have to remove 111 bolts from the panel which was never designed to be removed in space. Ball's partner, ATK, designed the Fastener Capture Plate (FCP) that was actually envisioned to be used on the now cancelled Hubble Robotic Servicing Mission (HRSM). So this equipment has now been imported over to SM-4. The robotic servicing mission was actually to be performed by DEXTRE, built in Canada, and which was transported by a shuttle last year and installed on the International Space Station (ISS).

Ball engineers believe that as of today, astronauts have a greater chance of success compared to DEXTRE. "But over time, the robotic capabilities would certainly have improved. The real problem was whether the robot could have been designed in time to accomplish the task to save Hubble before it died. So it was more an issue of scheduling constraints", according to LaPole.

If the fasterers get stuck or stripped, then contingency plans are in place to have the astronauts drill the fasters out. "So the operation could take longer than planned. Then the astronauts will extract the tight fitting power card. Then they will install the new card in a difficult operation and they must not damage it", explained LaPole. "It's an issue of dexterity as they carefully and slowly insert the new card. The astronauts have practiced this task thousands of times". The replacement card was built with new features to aid in the astronauts during installation. For example, guides and visual markers have been added to the card to help in seating.

LaPole told me that, "The other instrument replacements should be relatively routine since they have been done before. The basic operation involves opening the doors, releasing the latches, extracting the old instruments, storing the old instrument in the shuttle cargo bay, installing the new instrument, relatching all the latches and putting the plugs back in. WFC3 and COS are each the size of a phone booth and were constructed slightly smaller in size for better tolerances and to help ease the process in and out".

"Ball started building COS eleven years ago. But the ACS hardware was designed and built in only 11 months which is practically unheard of in spaceflght operations. Basically it felt like