Astronauts Fly into Cape. Countdown Clock Ticking for Mission to Save "The People's Telescope"

At last, the official countdown for liftoff of Space Shuttle Atlantis finally commenced today at 4 PM following the "call to stations" on this bold and long awaited mission to save "The Peoples Telescope". The countdown clock is ticking back from T-43 hours and launch personnel took their seats inside Firing Room 4 of Kennedy's Launch Control Center. There are no technical problems being worked at this time. The current weather forecast is "80% Go".

Today (May 8) I am reporting directly from the tarmac of KSC's Shuttle Landing Facility. It's a beautiful but hot (96 F) and sticky day at T minus 3 days to launch. At 5 PM EDT the 7 member crew of Atlantis flew themselves into the Cape from the Johnson Space Center, solo and in pairs, on a wave of five NASA owned twin seat T-38 jets. With jet engines blaring and cockpit doors opened upright they taxied in on the runway from the west to be greeted by the waiting crowd of dozens of family members, NASA officials and support staff, and a roughly 50 member strong press contingent. 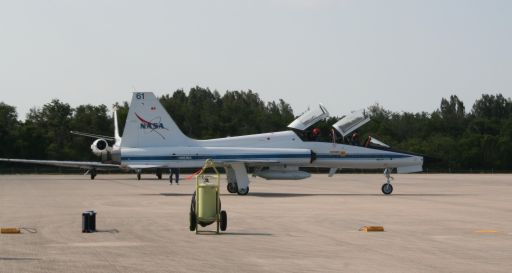 TS-125 Astronauts arrive at KSC aboard T-38 jets on May 8, 2009.
he crew gathered on the runway for a round of handshakes, high fives and merriment to celebrate their arrival. Then they approached us and each crew member spoke briefly from the heart, led by Shuttle Commander Scott Altman. This crew is clearly very excited about the task at hand.

"Hello Florida ! It's great to be here at last. It's been a long road to get here and we're all thrilled", beamed Scott Altman.

Pilot Gregory Johnson said, "It feels sweet. And it's an honor to be here and see the shuttles on the pads. I appreciate the effort that everyone has taken to get us here today".

"It's an honor to be part of this mission to go service the Hubble Space Telescope. I get to do two spacewalks and some of the robotic arm operations", explained Michael Good. 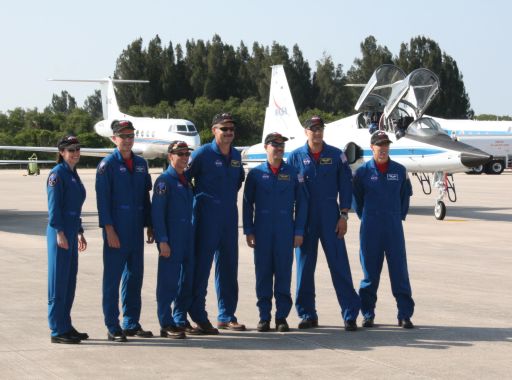 even member crew for Servicing Mission 4 pose for photographers at the Shuttle Landing Facility.

quot;I'm incredibly proud of the hard work that the people on the space shuttle program have done to get not just one, but two orbiters ready. Given where we were 4 years ago, it's pretty incredible that we are ready to go up and give Hubble a Hug. And Hubble is ready for us", says lead spacewalker John Grunsfeld.

Mike Massimino noted that "It's really cool for us to be here. We've been training together for over two and a half years. And we've gotten to know one another really well, we've become more like a family. For us to come down here and get a chance to get on the space shuttle in a couple of days and experience the dream of going into space and working on the Hubble together is something that we're really looking forward to".

Lastly, Andrew Feustel added, "It's great to be here in Florida again. And it was really special for us to fly by and see both shuttles on the pad. Thanks to our families for coming out and hope you enjoy the mission".

Altman then summed up the entire crews sentiments, "Its not just seven people flying on this mission. It's taken a hugh effort from all across the country. The people who trained us in Houston. The controllers are going to be watching over us while we are in flight. The folks who prepared the equipment at Goddard. The people who are here at KSC and who processed two orbiters ready to go at the same time. And the people who are here getting that vehicle ready to go for us. He then exclaimed with gusto, "We are ready. Lets launch Atlantis !"

The crew then walked over to their families for a few intimate moments of hugs and kisses next to the towering mate/demate device (MDD) on the runway ramp. Afterwards they departed in a separate van. Family and crew will get to enjoy a little bit more time together out at the pad this weekend before launch. 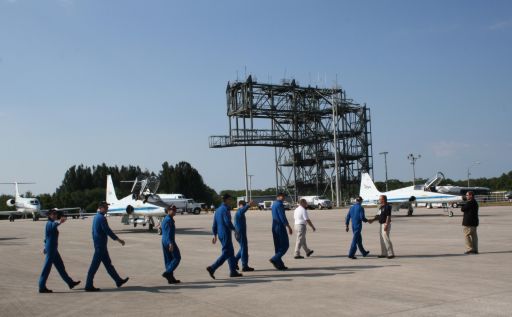