What to do if the big one is headed our way?

One question I am asked frequently is whether there's any international laws or agreements on how to handle the situation of an impending asteroid impact. Planetary Society members are very concerned about the threat of Earth impacts -- we conducted a membership-wide survey that just closed last week, asking them what activity of ours they most support, and the top choice was "Monitoring potentially dangerous near-Earth asteroids and comets." (The complete survey results will be posted at the end of this month.)

At 06:38 UTC on October 6, astronomers at the Catalina Sky Survey discovered an object provisionally called 8TA9D69 that appeared to be on a collision course with Earth. More formally known as 2008 TC3, the object entered Earth's atmosphere at 2:45:28 UTC on October 7, whereupon it exploded at an altitude of 40 kilometers, littering the northern Sudanese desert with tiny black fragments.
The question of how to respond in the event that our monitoring uncovers a threat wasn't even particularly relevant just a couple of decades ago, because we had no idea what was coming our way, but the recent experience with asteroid 2008 TC3 proved that we now have the capability to provide at least some warning of the location and potential magnitude of an asteroid or comet impact. (We were very proud about the fact that lots of the past winners of our Shoemaker Near Earth Object Grants took part in the international effort to track the asteroid; our members' money was put to good use that night.) We only had hours' warning with TC3, but it was very small and actually posed no threat to the ground; the more dangerous (i.e. larger) an object, the farther ahead of time we should notice it. We hope.

So we can expect (some) warning, but there's actually very little legal guidance for what to do in the event that we predict days, months, or years ahead of time that an object will impact Earth and cause harm. There's a host of different kinds of issues to consider. For events where there is little warning -- hours or days -- the question becomes one of communication and planning. If the impact is predicted to occur in or near a populated area, how should a warning be issued, and what should the population do? 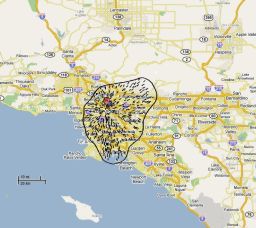 A Tunguska impact on LA

The shaded area shows the area devastated by the Tunguska impact, overlaid on a map of Los Angeles. It shows that a similar impact over LA would have destroyed a large portion the city, possibly killing millions.
But for events where we have many months or years of warning, the questions turn into ones of mitigation, and that's where it gets especially thorny, legally (and ethically) speaking. Can we do anything to alter the asteroid's course to aim its impact site away from a populated area, if not deflect it entirely? If such deflection results in harm to people who would not otherwise have been at risk, are they owed reparations (or should deflection even be attempted at all)? Who should take the responsibility (that is, spend the money) to develop mitigation strategies? When an impact threat is discovered, who has the responsibility to make decisions about how to respond?

Right now there's no framework, and I can only imagine the every-man-for-himself response that would attend the announcement of such a threat. There'd be lots of talk in the U.N., and the U.S. would act unilaterally; in the worst-case scenario, different space-faring entities would develop competing missions to go Do Something to the asteroid, which might but probably wouldn't interfere constructively. (Sounds like a good plot for a novel. Somebody go write that.)

It's a vacuum. So I was happy to see an announcement about a conference to take place next week at the University of Nebraska at Lincoln titled "Near-Earth Objects: Risks, Responses and Opportunities." It's billed as a "conference that will examine the legal and institutional challenges of international protocols if large asteroids or other interplanetary objects come too close to Earth for comfort," and is sponsored by the Secure World Foundation, the Association of Space Explorers, and the American branch of the International Law Association.

In response to our members' evident interest in the subject, our esteemed Executive Director Lou Friedman will be attending, and we are more generally ramping up our efforts in planetary defense. Director of Projects Bruce Betts will be going to another related conference, the first International Academy of Astronautics Planetary Defense Conference, at the end of this month.