Thanks to Ted Stryk for contributing the following notes on Thursday evening's poster session at the Lunar and Planetary Science Conference. --ESL

During the Thursday night poster session, there was an extensive presentation on the Stirling RTG [Radioisotope Thermal Generator -- see an earlier explainer on the Stirling here --ESL]. Basically, it uses a small plutonium source to power a small piston. It is projected to last a minimum of 17 years, including three years of ground testing and 14 years in space. Such technology would relieve an acute shortage of plutonium fuel for RTGs. They are also trying to develop a miniaturized system to be used for small missions such as Martian and Lunar network missions. They had scale models available. It is amazing to see how compact they are! 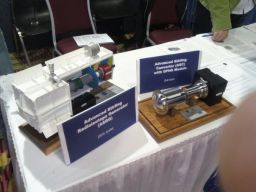 On the left is a model of the full Stirling RTG (at 50% size). On the right is the miniature kind that is envisioned for network missions.

Alfred McEwen presented a Discovery proposal that would use the Stirling RTG, an Io mission. It would arrive in 2021 and conduct repeated flybys, returning up to 20 gigabits each time. In addition this would provide a great waypoint between the most recent Io observations (by Galileo, Cassini, and New Horizons), and the Jupiter Europa Orbiter flybys toward the end of the decade. It would also carry instruments optimized to Io, something Jupiter Europa Orbiter does not do.

Chuck Wood presented a lunar tour that one can take in Second Life. It looks like many people might enjoy it, although I must say I fail to comprehend Second Life.

There were some amazing printouts of some of the Apollo Panoramic Camera scans being made from the first generation film being unfrozen for the first time in decades. The resolution is HiRISE-like and the images cover 20 percent of the Moon. It is hoped that these images could be used for extremely accurate cratering studies, among other things. [The idea here is that they'd look at the Apollo era data and compare it to data from a modern mission, presumably Lunar Reconnaissance Orbiter, to see if they can locate new craters formed in the intervening decades, which will help pin down the lunar cratering rate. --ESL] It is nice to see this data being restored to the point that it can again be used by scientists.