I've been posting so many words this week that it's a relief just to be able to post something because it's a cool photo. It just arrived in my inbox from Jim Head at Brown University: 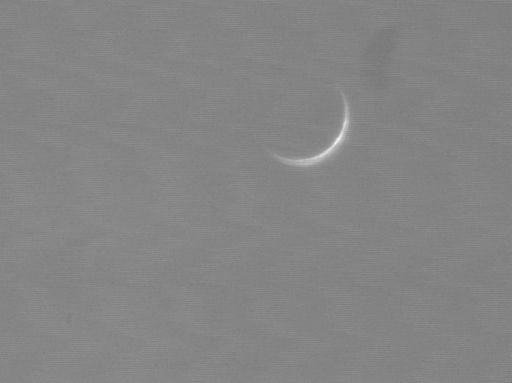 Venus, only nine degrees from the Sun

This striking image of Venus was taken by Bob Horton of the Brown University Physics Department. It was taken early in the morning of March 26 with the 16-inch telescope on top of the Physics Department's home, the Barus & Holley building. Venus was only 9 degrees from the Sun, so it was not easy to photograph. The disk illumination was only 1.3 %! The image is a single frame from a video image taken through a Meade 16" LX200 equipped with a Luminera SKYnyx 2-1 camera.

Horton noted that "for anyone trying to spot Venus so close to the Sun right now, one must exercise extreme caution not to accidently look directly at the Sun. I used telescope control software to position the telescope before removing the lens cap. I also used the edge of the door in the dome to block sunlight from shinning on the telescope."

n the coming weeks, Venus will move further away from the Sun and will become an easy object to spot, low in the eastern sky, about an hour before sunrise.

Thanks to Jim for forwarding it!