Yesterday Samuel Schon sent me his extensive notes from the two-day Microsymposium held last weekend, before the Lunar and Planetary Science Conference started, on the topic of volcanism on the Moon and Mercury. Sam is a third-year graduate student in the planetary geosciences department at Brown University, studying Mars geomorphology. I've posted his complete notes here; rather than post them all inline in the blog, I thought it'd be better to pull out some of the highlights. So the following is paraphrased from Sam's notes.

The choice of topic reflects the resurgence of scientific interest in the Moon and Mercury due to the new missions that have recently started returning data from the two cratered worlds: Kaguya, Chandrayaan-1, Chang'e 1 (and soon Lunar Reconnaissance Orbiter) from the Moon, and MESSENGER from Mercury. Sam said that there were two main questions that presenters were attempting to answer: how much of Mercury's crust is secondary, and for how long and how recently was the Moon volcanically active? To even understand what the first question is talking about, we need to step back a bit to talk about primary, secondary, and tertiary crusts.

HDTV image of the Moon from Kaguya

This is a still from the first high-definition movie shot from a spacecraft beyond Earth orbit. Kaguya was in a 100-kilometer-altitude polar orbit around the Moon on October 31, 2007 when it captured the movie. This frame shows some of the smooth lava-filled plains at the western edge of Oceanus Procellarum on the lunar nearside, an example of secondary crust. The primary anorthosite crust of the lunar highlands occupies the left side of the image. The Kaguya movie, which runs eight times faster than real time, can be viewed here.
Jim Head explained the paradigm, which was originally championed by S. Ross Taylor: Primary crust is the original surface of a planet, the part that solidified from the original magma ocean. The anorthosite that forms the lunar highlands is an example. Secondary crust forms when the primary materials of a planet are partially melted; when you heat rocks and they start to melt, the first stuff that melts out of the rocks has a different composition from the bulk composition of the rocks. If you somehow separate this early melt from the rocks, erupt it, and solidify it, you get a secondary crust. Mid-ocean ridge basalts on Earth are an example of a secondary crust -- the lavas that make them up come from such partial melting of Earth's mantle. The basalt lavas of the lunar maria are also a secondary crust. Finally, there are tertiary crusts, which have undergone so much geologic processing (repeated partial melting, etc.) that they bear little compositional resemblance to the primary crust; Earth's continental crust is tertiary. Identifying how much more evolved Mercury's crust is, compared to the Moon's, is important both for studying the history of Mercury and for figuring out what the early Earth may have looked like.

All of these crusts form through volcanic processes, so inventorying the evidence for volcanoes and associated deposits on the Moon and Mercury is important. Lisa Gaddis gave a talk about pyroclastic deposits found on the Moon, saying that more than 75 of them have been identified, commonly associated with floor-fractured craters, a type of crater that's also been seen on Mercury. Laura Kerber looked at the kinds of volcanic vents seen on Mercury and, through mathematical modeling, concluded that Mercurian volcanism involved more volatile gases than the Moon did. This isn't really surprising -- the "big whack" hypothesis that explains the formation of the Moon suggests that the Moon would be lacking in lots of those volatiles, which would have been lost as a result of the fantastic temperatures and pressures of the collision -- but it's always good when different lines of research point to the same conclusion. For context, Sam said, the lavas that erupt from Earth's spreading seafloor contain similar amounts of volatiles, at levels of a couple thousand parts per million, to what Kerber's models predict for Mercurian lavas.

To understand the geologic history of both the Moon and Mercury, researchers would like to be able to state absolute numbers for the ages of volcanic activity. For the Moon, we've returned rock samples that have been age-dated in the laboratory, so the chronology is fairly well established, at least for the regions visited by astronauts and sample return missions. At Microsymposium Harry Hiesinger summarized efforts to extend these ages over the rest of the Moon, and he concluded that mare volcanism has been active over a very long period of time -- 2.8 billion years, in total -- extending from about 4 billion to 1 billion years before the present. 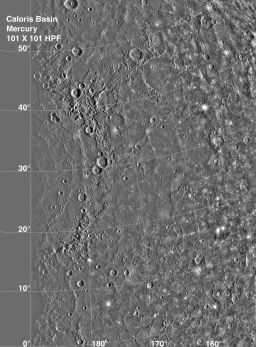 The Caloris Basin is one of the largest basins in the solar system at approximately 1,550 kilometers in diameter. Only half of it was seen by Mariner 10 as it sped past Mercury on March 29, 1974. This view was "high-pass filtered" to remove the brightness and darkness effects of the solar illumination angle, to better emphasize topographic features. A comparison of the interior of Caloris (to the left) and the exterior (to the right) shows that the unusually smooth terrain outside Caloris displays fewer craters than the interior.
For Mercury, of course, we don't have any returned samples; we don't even have any Mercury meteorites (because even the largest impacts on Mercury can't impart enough energy to Mercury rocks to get them up out of the Sun's gravity well to the distance at which Earth orbits). So the best we can do is count craters, make some good guesses about the rate at which cratering happens, and use that to date events on Mercury. Clark Chapman presented the results of recent progress on such crater counting efforts, and reported that, relative to the numbers found on the Moon, there is an unexplained deficiency in the number of craters on Mercury less than about 30 to 100 kilometers in diameter. He suggested two diverging explanations: there could be extensive volcanic flooding (which would tend to obliterate evidence of smaller craters) or that there's an unappreciated difference in the cratering process or impactor population at Mercury.

Caleb Fassett also talked about crater counting on Mercury, focusing on a different problem: if you count craters within the giant Caloris basin, and count craters on the outside of the basin, you'll find that the interior plains of Caloris have a higher crater density than the exterior plains, especially at small diameters. This is really counterintuitive. The mental model that most people have of large impact basins is: impact happens, digs a big hole in the ground, later if there's volcanism the hole gets filled with flat lava plains. So big basins generally have more craters outside than inside. Caloris is the opposite. What this really has to mean is that the plains outside Caloris have been modified since the Caloris impact, most likely by volcanism, to erase the smaller craters.

Thanks again to Sam for his notes, and again, you can get the full details here.