Every year at the Lunar and Planetary Science Conference there is a weekend meeting co-hosted by Brown University and the Vernadsky Institute called "Microsymposium," with a narrowly-defined theme. This year's Microsymposium was titled "Volcanism on the Moon and Mercury." Through my old graduate advisor Jim Head, I connected with two of his current research assistants, Ailish Kress and Samuel Schon, who agreed to send me reports on this year's meeting. Here's Ailish's contribution. Thanks, Ailish! --ESL

by Ailish Kress
Ailish Kress graduated from Brown University in May, 2008 with a B. Sc. in Geological Sciences and is working as a research assistant for Professor James W. Head, III, of the Planetary Geosciences group at Brown University. Her research focus is the relationship between geomorphology of flow features and crater populations in the mid-latitudes of Mars and implications for recent global climate change.

The 49th Brown-Vernadsky Microsymposium, entitled "Volcanism on the Moon and Mercury," began with a brief introduction by James W. Head, III, of Brown University, describing the history of the Microsymposium and the aims of this year's session. Professor Head and Alexander "Sasha" Basilevsky, of the Vernadsky Institute, Moscow, Russia, are the co-founders and organizers of the Microsymposium.

The Brown-Vernadsky Microsymposium is a thematic conference, generally focusing on a topic within comparative planetology, and it is held twice a year: for three days in Moscow in October, and for the weekend preceding the Lunar and Planetary Science Conference in Houston, TX, in March. In addition, the Microsymposium is a venue for fostering international cooperation among planetary scientists. It has an illustrious history spanning nearly a quarter of a century, and it has survived -- in both the US and Russia -- some of the less friendly periods of the Cold War. The leaders and participants are still around, and the beer and vodka still flowing.

Here are some of the highlights from the meeting. 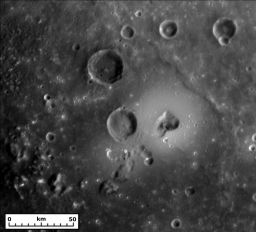 Shield volcano on the rim of Caloris basin

A kidney-shaped depression sits in the center of a broad, smooth dome or shield-like feature, interpreted by the MESSENGER science team to be a volcano. The bright halo surrounding the kidney-shaped depression is interpreted to be an explosive volcanic eruption deposit. This feature is distinct in color images from its surroundings and represents compelling evidence for volcanism on Mercury.
MESSENGER flyby data show evidence for pyroclastic deposits on Mercury (Kerber) and implications for their formation as compared to lunar pyroclastic deposits were presented and discussed (Gaddis). ["Pyroclastic" refers to deposits of blocky or cindery material that form when gas-rich lava erupts out onto the surface. If you have eruption into a vacuum, as happens on Mercury but not on Earth, pyroclastic deposits are much more likely. --ESL]

One question raised during the meeting that will probably guide much of future research on Mercury is whether Mercury has any exposed primary crust (presentation by Rothery) or whether it can be said to have had any primary crust at all, about which there was some good discussion. Widespread evidence for flood volcanism and pyroclastics, as well as impact-derived crustal material may challenge the view that Mercury, like the Moon, has a mostly primary crust, which will affect our understanding of how Mercury formed.

New results from the Moon Mineralogy Mapper instrument on the Chandrayaan-1 are much better spatial resolution than any previous, and are able to distinguish between shocked and crystalline forms of anorthosite, which will potentially reveal a lot about the Moon's geologic history. ["Crystalline" anorthosite would be the Moon's primary crust, the stuff that formed when the Moon's global ocean first crystallized. Later, when massive impacts happened, the anorthosite would have been "shocked," its crystal structure altered by the extreme pressures of the shock wave associated with the impacts. --ESL]

The two members of the Kaguya team who gave presentations, Junichi Haruyama and Sho Sasaki, showed several amazing movies taken by the HDTV instrument and a wonderful animation of the Kaguya global topography and lunar gravity datasets displayed on rotating spheres. The HDTV movies can be found at the JAXA video archives. The topography and gravity datasets provide useful data at resolutions equal to or better than previous datasets and could be significant resources to help scientists learn more about the Moon's interior and its thermal evolution. 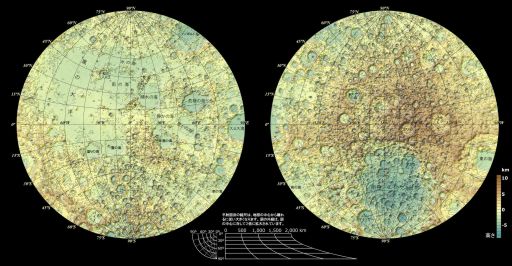 Topographic map of the Moon from the Kaguya Laser Altimeter (LALT)

The most detailed-ever topographic map of the Moon has been derived from Kaguya Laser Altimeter data taken in 2007 and 2008.