Attack of the dust donuts

Yesterday I was browsing through the latest raw images from Cassini and came across a set taken of the rings with Cassini's wide-angle camera that all looked something like this: 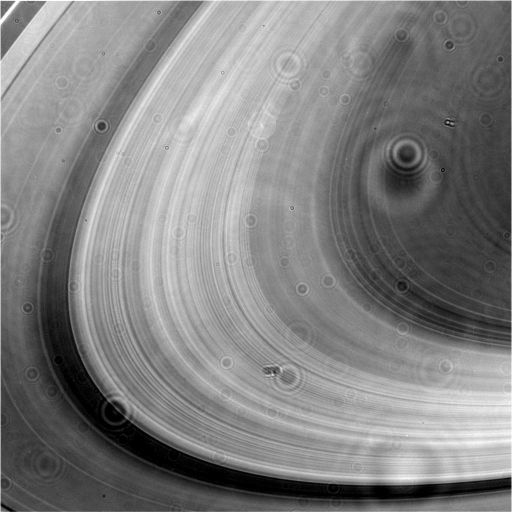 Cassini took this photo of Saturn's main ring system with its wide-angle camera on March 10, 2009.
What on Earth (or, I guess I should say, what on Saturn) is going on with these photos? For those of you who are familiar with Saturn's ring system, it's not too difficult to figure out that we're looking at pretty much the whole ring system curving through the field of view, seen from the side that's being illuminated by the Sun. The center of the image is taken up by the very stripy B ring. Outside the B ring is the dark lane of the Cassini division. Outside of that is the more muted stripiness of the A ring, with the Encke gap near its outer edge, and just nicking the upper corner is a tiny bit of the F ring. That much of the image makes sense. But what the heck is going on with all of those bull's-eyes splatting the rings everywhere?

Here's a hint, in the form of another image from the same set. 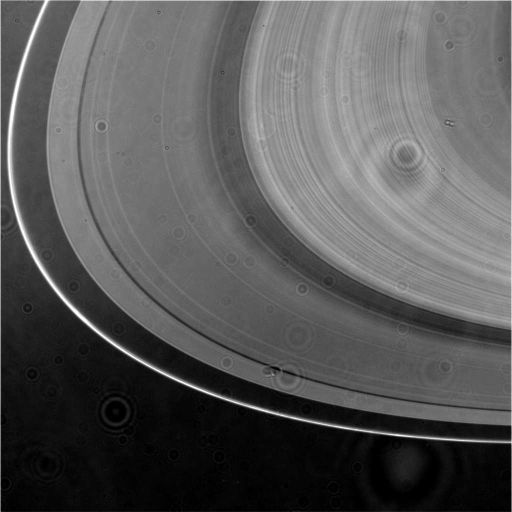 Each one of those bull's eyes is a single mote of dust somewhere within Cassini's camera system; I'm told that almost without exception, the dust is sitting on the filters that are placed in front of Cassini's optics to capture color information (in these examples, it's the clear filters). Because Cassini's cameras are designed to be in focus on targets thousands of kilometers away, the bits of dust located just centimeters from the detectors are completely out of focus, dissolving into the concentric rings that you see on these photos.

These dust donuts affect every single photo that Cassini takes, but ordinarily they're not noticeable; it's only when Cassini is shooting photos of very dark or low-contrast targets that they become obvious. So I'm accustomed to seeing them in close-up photos of the atmospheres of Titan or Saturn, but I can't recall that I have noticed them in photos of the rings before. (Which isn't to say they weren't there, I just didn't notice them.) For a while I was really, really confused about why they should be so prominent in images of the whole ring system, especially the sunlit face of the ring system, which I think of as a pretty bright target.

But then I realized something. Saturn's equinox is only a few months away, in August. At equinox, the Sun is going to set from this formerly sunlit face of the rings. But we're so close to the equinox that the Sun must be awfully close to setting, so although we are looking at the sunlit face of the rings, the Sun is coming in from an incredibly low angle, and the rings are getting darker and darker. You can see just how dark they are when you look at another image from this set, in which some of the sunlit portion of Saturn itself is visible. The image also makes it clear that although we're on the sunlit side of the rings, we're seeing them at pretty high phase, with the Sun located nearly in front of the spacecraft, a geometry that also makes the rings appear darker than they would if the Sun were behind the spacecraft. 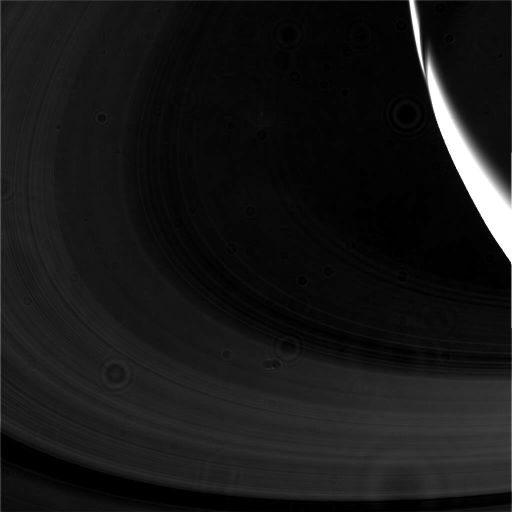 Cassini took this photo of Saturn's main ring system with its wide-angle camera on March 10, 2009. The spacecraft was on the night side of Saturn, so the planet appears only as a skinny crescent. The image is covered with donut-shaped artifacts caused by motes of dust sitting on the filter wheel in front of the camera.
That bit of Saturn crescent is at maximum brightness -- it appears to be overexposed in these images, while the sunlit face of the main ring system is dark, dark, dark. Compare it to this view, which also shows Saturn as a crescent with a bit of the sunlit southern face of the rings, but much earlier in the season, more than two years ago. No dust donuts here. 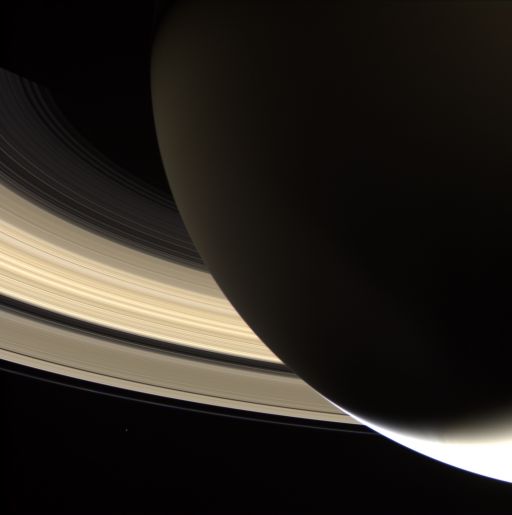 Saturn and its rings

Cassini took the images for this approximately true-color photo of Saturn and its rings on February 27, 2007 when it was on the night side of the planet and to the south of the ring plane.
Night really is falling the southern face of Saturn's rings, and dust donuts are going to be a fact of life in images of the rings for a while.