Once again I find myself posting something that you'll probably see on every other space-related blog today, but how can I resist a new Hubble photo of Saturn? Particularly one that includes no fewer than four moons?

Hubble catches four moons on the face of Saturn

On February 24, 2009, Hubble's Wide Field and Planetary Camera 2 captured a rare quadruple transit: four moons crossed in front of Saturn's disk at the same time. The moons are, from left, white Enceladus and Dione (both of which are near the rings and casting shadows onto the planet); orange Titan; and white Mimas (just at the right-hand edge of the disk). We can only observe such transits from Earth for a brief period once every fifteen years as Earth nears and then crosses Saturn's ring plane.
Upon deeper digging, I found that the release included five more images captured at nearly the same time, which I just had to toss together into an animation. There's actually a fifth moon visible in the animation, the tiny dot of Janus, at lower left, below the rings, in the first three frames. (Janus is very hard to spot unless you download the full-res version.)

Hubble catches four moons on the face of Saturn

The six images in this animation were captured on February 24, 2009, and show five moons circling Saturn, four of which cross the face of Saturn simultaneously in the fourth frame of the animation. The largest orange moon is Titan; to the right of Titan is Mimas; to the left of Titan are Enceladus and Dione. Very dimly visible in the first few frames of the animation (when it's viewed at full resolution) is Janus, just below the rings.
We can see transits like this from Earth only during the brief period every fifteen years when Earth is crossing through Saturn's ring plane; this event only happens near the time of Saturn's equinoxes. Unfortunately, Saturn's equinox in August will happen when the planet is really close to the Sun in our sky, so this particular equinox and ring plane crossing isn't a particularly good one for Earthbound observers. The Cassini orbiter doesn't have the same problem, because it's right there at Saturn; it'll be able to observe Saturn right through its equinox. And, of course, Cassini gets lots of opportunities to observe transits of moons across the face of Saturn, because the orbiter necessarily crosses Saturn's ring plane twice every single orbit. (It even spends some of its orbits essentially within Saturn's ring plane.) Here's just one pretty example of a Cassini transit photo. 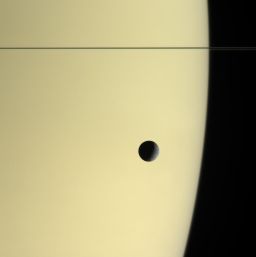 This true-color view of Tethys floating in front of Saturn was captured by Cassini on December 3, 2005. A direct comparison of Saturn and Tethys shows that Tethys is much darker than Saturn at wavelengths of light visible to human eyes.
But even Cassini doesn't often get the chance to see four moons crossing Saturn's face at once -- it's rare that so many would happen to be at roughly the same longitude in their orbits at the same time.

The pictures are pretty, but what can we learn from them? I poked around on the website of the Space Telescope Science Institute to see if I could figure out what scientific purpose lay behind the transit photos. Here is the abstract of the proposal from a team of scientists led by Keith Noll:

We propose a program of 39 orbits to observe 6 targets with WFPC2 following a successful return to science using side B electronics. These observations will be used for Hubble Heritage releases in the months leading up to servicing mission 4 [currently scheduled for May 12, 2009]. Because of launch delays, our reserve of releasable images is growing dangerously slim. We are proposing here to replenish one of our important lines of communication with the public.

We have carefully chosen targets that can efficiently use single pointings of WFPC2 to obtain images of visually striking and astrophysically interesting targets. Observations will reach high S/N [signal to noise] and will be dithered and subsampled to improve the resolution and pixel scale to near ACS/WFC3 quality at a modest cost in exposure time. Most of the observations will schedule in the interim between a return to science and the availability of new science proposals that may be selected in response to an interim call for proposals.You know what? Sometimes a pretty picture is just a pretty picture, and I'm glad we use our greatest telescopes just to capture pretty pictures.