Today the New Horizons team released photos captured by their high-resolution camera of the Neptune system, in which both Neptune and Triton were visible. Before you get too excited about the first observations of Triton since Voyager 2 flew by two decades ago, I should mention that New Horizons was really far away from Neptune at the time the photo was taken -- 3.75 billion kilometers away. To put this in context, New Horizons was actually more twice as far from Neptune than it was from Earth when it took the photo. That's really really far. So if you are hoping for a new photo of Triton's famed cantaloupe terrain, you're going to be disappointed.

What you should be excited about is the fact that New Horizons successfully separated Triton's light from Neptune's; according to the New Horizons release, the planet was 180 times as bright as the moon, as seen from the spacecraft. Here's the photo: 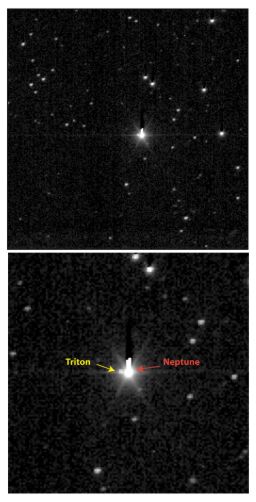 This image represents a feat of astrophotography performed by New Horizons. The top frame is a composite, full-frame (0.29° by 0.29°) LORRI image of Neptune taken Oct. 16, 2008, using an exposure time of 10 seconds and 4-by-4 pixel re-binning to achieve its highest possible sensitivity. The bottom frame is a twice-magnified view that more clearly shows the detection of Triton, Neptune's largest moon. Neptune is the brightest object in the field and is saturated (on purpose) in this long exposure. Triton, which is about 16 arcsec east (celestial north is up, east is to the left) of Neptune, is approximately 180 times fainter. New Horizons was 3.75 billion kilometers from the Neptune system when this photo was taken.
The photo reminded me of the discovery photos for Pluto's moon Charon. Until these photos were taken, no one knew that the light from Pluto was actually the combined light of two separate and similarly sized bodies locked together by their mutual gravitational attraction. 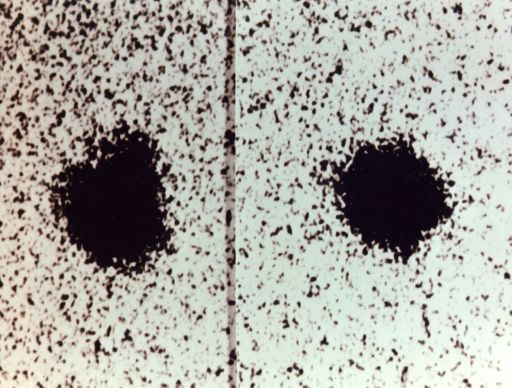 Discovery images of Pluto's moon Charon. The images were captured with the 1.55-meter (61-inch) Kaj Strand Astrometric Reflector at the USNO Flagstaff Station. Both images are of Pluto. The right image appears round, but the left one has a noticeable lump to the upper right. The lump in the left image is Charon; in the right image Charon is located along the line of sight to Pluto and is thus invisible.
Of course, we knew Triton was there; and New Horizons is not going to discover any new moons of Neptune from such a great distance. So what's the point of doing this observation? There are several reasons that it was a valuable exercise for New Horizons and for outer planets science. One is that New Horizons is seeing Neptune and Triton from a much higher phase angle (the angle between sun, planet, and observer) than is ever possible from Earth. From Earth, which is located so much closer to the Sun than Neptune, we always see Neptune and its moons as nearly "full," with phase angles of two degrees or fewer. New Horizons' observations are at a phase angle of about 21 degrees. Observing a planet with a spectrometer at different phase angles can tell you about the composition and state of the atmosphere, among other things.

Another good reason for New Horizons to photograph Triton, no matter how far away it is, is because Triton is the closest analog to Pluto and other Kuiper belt objects that we've ever seen; it's a chance for New Horizons to whet its appetite observing something with similar properties to its eventual science targets.

Another good reason is because New Horizons will be doing lots of observations of Pluto and other Kuiper belt objects from very, very far away, and taking this photo served as practice for the long exposures and steady tracking of faint and distant objects that will occupy it for so much of its primary mission. The steady tracking meant New Horizons could study Triton's light separately from Neptune's, much as it will eventually separate the faint light of Nix and Hydra from Pluto and Charon's, and possibly even study other, undiscovered satellites of the as-yet-undiscovered Kuiper belt objects that New Horizons goes on to investigate.