A first map of Io, revisited

On the occasion of the 30th anniversary of the Voyager 1 flyby of Jupiter's volcanic moon Io, Jason Perry has been writing a retrospective series of blog entries. But he's not just writing about history; he dug in to the Voyager 1 image archive and has reconstructed a massive, high-resolution mosaic of Io's southern hemisphere containing dozens of named volcanoes, flow features, and mountain chains. It's pretty spectacular. Here's two versions of the mosaic, one at glorious full resolution and one lower-resolution with names for all the features. It took almost an hour for Voyager 1 to shoot the 33 images that Jason assembled into this mosaic, at around 13:00 UTC on March 5, 1979. 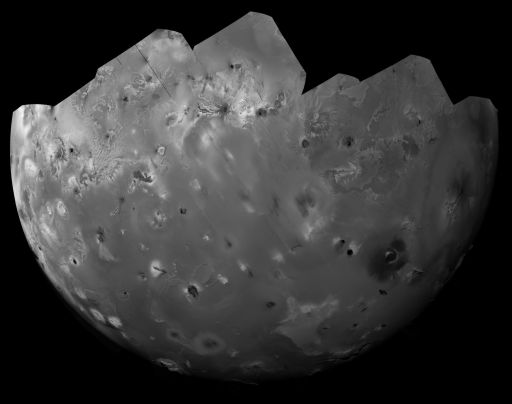 This mosaic consists of 33 separate images acquired by Voyager 1 as it approached for its close flyby of Io on March 5, 1979. Because it took almost an hour to capture all the images, Voyager 1's point of view shifted throughout the imaging; the individual photos have been "reprojected," stretched and warped based on information about Voyager 1's position while capturing each image to fit a common point of view (in this case, it is an orthographic projection, in which the viewpoint is from infinity). The mosaic reveals a number of volcanic features: paterae, flow fields, tholi, and plumes, in various shapes and sizes. Paterae in the south polar region tend to be larger than those nearer to the equator, suggestive of differences in lithospheric properties and magma source regions in Io's mantle. 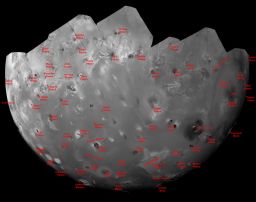 Jason's writings (to date) on this 30th anniversary can be found here, here, here, here, and here; he says he'll be closing out his coverage tomorrow. In one entry he posts an excerpt from an excellent NASA publication reviewing the events, Voyage to Jupiter (NASA SP-439) (the link takes you to a ~4MB PDF, an unfortunately rather badly scanned version). Here's a bit that he didn't post, which I found fascinating:

As time passed, it became apparent that Voyager 1 had been affected by Jupiter's radiation environment. the basic timing -- the main clock on the spacecraft -- had slowed down. First it slowed by 6.3 seconds, but by March 6 it was found to have slowed a total of eight seconds. In addition, the two central computers apparently got out of synchronization both with themselves and with the flight data subsystem. On March 6 it was reported that the spacecraft cameras were shuttering at one frametime (48 seconds) early; this was partly offset by the eight-second spacecraft "masterclock" slowdown resulting in images (according to our clocks) being photographed forty seconds early. This timing error resulted in the camera taking some pictures while the scan platform was moving, causing some blurred images. A number of the highest resolution images of Io and Ganymede were seriously degraded by this malfunction. (p.75)

I scanned forward in the text to see if Voyager 2 suffered the same sorts of malfunctions during its flyby four months later; it seemed not to have had the clock problems, but instead had radiation problems with a sensitive radio receiver. Its frequency kept on shifting, so ground controllers had to broadcast the uplink commands to the spacecraft at many different frequencies until they found one that the spacecraft would listen to.

Rereading these accounts reminds me of the importance of initial reconnaissance missions. They don't just give us our first pretty pictures of a place, they also tell us what conditions await any followup mission. The radiation environment at Jupiter was much more problematic than the Voyager engineers had expected. The follow-on mission to Jupiter, Galileo, did famously have a problem with its antenna, but Galileo made up for its slow data transmission rates in part by coping extremely well with the hellish radiation environment, surviving plunge after plunge deep into Jupiter's energetic magnetosphere, lasting years longer than it had any right to.

For more than an hour after its landing on Titan, Huygens broadcast repeated images of this view to Cassini.
It's easy to second-guess the engineers of a spacecraft; I can't tell you how many times I received questions from readers about the Huygens Titan probe to the effect of "why didn't they engineer it to take more pictures in different directions after the landing?" The fact is that there were so many different possibilities for what Huygens could encounter upon landing on Titan that it was impossible to engineer a spacecraft that could return exactly the kinds of data that everyone would want to see once it landed. In fact, the most likely scenario for what would happen to Huygens upon landing was death. Who knew it would land on a flat, dry plain, and then survive for so long? Now that Huygens has blazed a first trail beneath Titan's clouds to its surface, aerospace engineers have a much narrower set of possibilities to design for. Huygens will, eventually, be followed by a spacecraft that will build on reports from the pioneer, and will embark on its own mission of exploration with a set of equipment tailored to survive in the now-less-mysterious environment long enough to return the best possible science data.

There's bound to be such Monday-morning quarterbacking on all future initial reconnaissance missions. I'm sure there'll be people lamenting some missed opportunity by New Horizons at Pluto, some phenomenon we could have learned so much about if only they'd sequenced such-and-such an observation to take place of such-and-such a location. When Dawn arrives at Vesta, another world that's never been explored up close, it will at least have the luxury of being in orbit, so some of the science observation plans could presumably be changed if they discover something really unexpected (for example, a tiny moon), but what they can't change is the suite of scientific instruments they brought with them. Just remember that if we knew exactly what to expect at all of these locations, we wouldn't need to explore them in the first place!