I just received one of those chillingly-titled missives from JPL: "Mars Odyssey Mission Status Report." The words "Status Report" in a JPL email title almost always mean that something has gone wrong with a spacecraft, but this time it's not as bad as it sounds: Mars Odyssey is functioning totally normally at this time. However, the report is a warning that they are about to have to perform a risky procedure on the spacecraft systems: rebooting the computer. If that doesn't sound risky, it may help for you to know that they haven't rebooted Odyssey since October 31, 2003. (2003! I can't imagine any computer on Earth not needing to be rebooted for more than five years.) 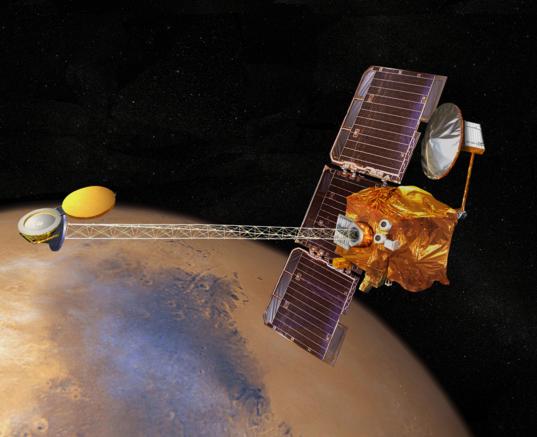 Artist's conception of the 2001 Mars Odyssey spacecraft in orbit around Mars.

If it's risky, and the spacecraft is working fine, why do it at all? It is "to address a long-known, potential vulnerability of accumulated memory corruption." Memory corruption is caused by cosmic ray hits and other effects of the space radiation environment. Rebooting the computer "is not a risk-free event, but the Odyssey team and NASA have carefully weighed the risks of performing a cold reboot compared with the risk of doing nothing, and determined that the proper course of action is to proceed with the reboot."

Furthermore, "As an additional benefit, the cold-reboot procedure will demonstrate whether Odyssey's onboard backup systems will be available should they ever be required."

It seems that Odyssey, like most spacecraft, has a complete, redundant set of critical subsystems -- "processor, navigation sensors, relay radio and other subsystems," referred to as the "B side." However, in the event of the failure of any of these critical components on the spacecraft's A side, Odyssey would have to switch to all of the B-side components at once. But on March 21, 2007, the B-side high-efficiency power supply became inoperable, so as of now, the B side is not available if any of the A-side components fail. Investigation of the power supply problem has led engineers to conclude that rebooting the computer will probably fix the problem.

The two issues -- accumulated memory corruption, and B side high-efficiency power supply inoperability -- are unrelated. But rebooting the computer should repair both of them. Hopefully the reboot won't cause any new problems. The Status Report didn't mention how much of an effect, if any, the reboot would have on the rovers, which primarily use Odyssey to relay their science data to Earth.

The reboot is going to take place next week -- stay tuned for a report on how Odyssey comes out of the procedure.