Looks like the Dawn flyby of Mars went well

Thanks to "OWW" on unmannedspaceflight.com for pointing out this image release on the NASA website: a photo of Mars taken by Dawn, they say, near its closest approach to Mars during its February 17 flyby. According to the caption the illumination is "dawn" light -- it'd be steeply slanting across the landscape, highlighting the scarps and lineations in Tempe Terra, softening any albedo (bright-dark) variations there might be in this spot. I'm especially intrigued by the very smooth apron to the upper left of the steep scarp, that seems to blanket the lineated terrain in the lowlands, covering up any other topographic features that might once have been there. It's quite pretty, and if it was taken near closest approach and is on target, then it seems we should be seeing more good stuff soon! I'm looking forward to it. 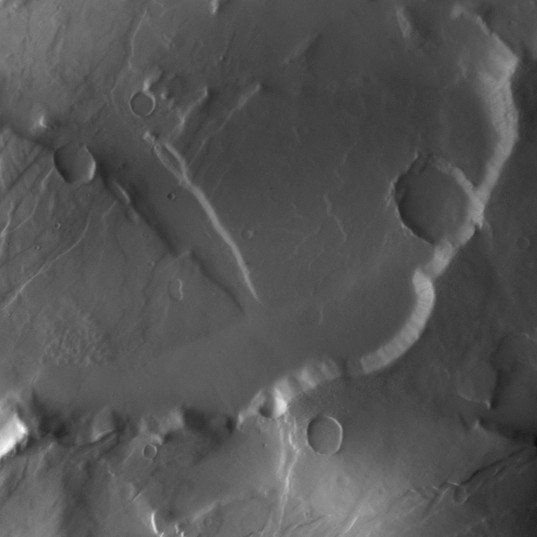 This image of Mars was captured by the Dawn spacecraft near its closest approach during its February 17, 2009 gravity assist flyby. The photo wasn't taken for science purposes, as Mars is being studied very well by orbiters in place there; instead, what we know about Mars is being used here to test the performance of Dawn's cameras. The image shows a portion of the fretted and cratered northwest margin of Tempe Terra, Mars. The scarp of the highland / lowland boundary is illuminated by the light of dawn, and traces of fog appear in the lower portion. The area covered by the image is about 55 kilometers across.