Extensions for ESA's missions to Venus and Mars

ESA's Science Programme Committee has seen fit to extend the funding for both Mars Express and Venus Express until at least December 31, 2009; this is a seven-month extension to both missions. This is the third mission extension for Mars Express, which has been in orbit since December 2003, and the second extension for Venus Express, in orbit since April 2006. It may seem like a no-brainer to continue operating healthy spacecraft, but it is worth taking a look at the numbers and seeing if the allocation of millions of Euros that it will cost ESA to continue operating these two missions represents the best use of their resources.

One thing in these missions' favor is that it's usually cheaper to operate a spacecraft later in its mission than it is earlier in its mission, for several reasons. Just a few that come to mind: procedures and command sequences have been worked out long ago, during the primary mission, so it's easier (which means it takes less human effort, or fewer employees) to develop the lists of commands that tell the spacecraft what to do each day. Also, it's usual that in primary missions, the science team tries to cram every moment of every orbit full of observations, frequently alternating between instruments, as everyone tries to gather all the data they need to declare the mission a success; later in the mission, with "mission success" under their belts, the schedule's usually a little more relaxed, with at least some of the science being of a "monitoring" nature, which means the same types of observations are performed repeatedly -- which is easier to command, and demands less resources. Speaking of resources, missions that are on extensions often command a lower priority at deep space communications facilities; where ESA may once have made use of NASA stations for some time-critical communications, during these extensions ESA probably is willing to wait if necessary to send most data through its own stations, which costs less.

Anyway it's good to be sure that Venus Express and Mars Express will be operating throughout the rest of this year. It makes me wonder how long, theoretically speaking, these missions could operate, provided there were no unforeseen events. Sooner or later, they'll exhaust maneuvering fuel that's necessary for maintaining their orbits and for pointing their antennae to Earth for communications sessions. I wonder how long that would take? Any ESA folks who read this blog, please speak up! 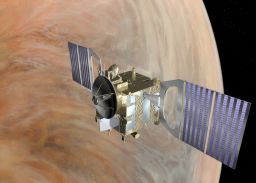 Venus Express (top) and Mars Express (bottom) were built to the same basic design; the main differences between the two are in the choices of science instruments and in the size of the solar arrays. Mars Express needed larger solar panels, as it operates about twice as far from the Sun as its sister spacecraft.