Spring is coming to Titan's northern hemisphere (as it is to all the rest of Saturn's moons, along with Saturn itself). Consequently, the cameras are finally getting enough light to take photos of the lakes near the north pole; until now, they've pretty much been shrouded in shadow, visible only to the active sensor system of the RADAR instrument. Thanks to Gordan Ugarkovic for the tip on this image. 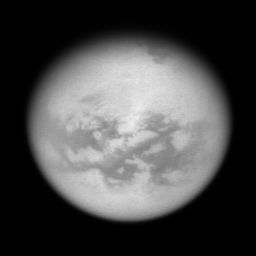 Cassini captured some distant views of Titan on January 31, 2009. It is now close to the northern spring equinox in the Saturn system, so more and more of the extreme north of Saturn and its moons is illuminated with every passing day. Consequently, the cameras are finally obtaining unmistakable images of the dark outlines of the methane-ethane seas that Cassini's RADAR instrument has discovered in the extreme north, including the gigantic Kraken mare, visible at the top of this view.
And, while I'm giving props to Gordan, he also recently posted at unmannedspaceflight.com this image. No, it's not a goose egg; it's Saturn's moon Pallene, the second one discovered in Cassini images. 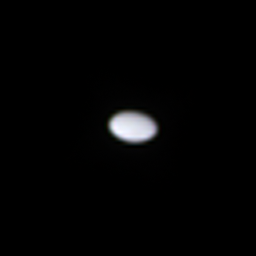 The best image Cassini took of Pallene throughout the primary mission reveals no features on the surface, which appears to be very smooth. This is a color view taken from a distance of 76,000 kilometers and a phase angle of 21 degrees on June 8, 2005. It has been magnified four times. The surface has a blue tint to it, like Telesto but unlike most of the other tiny moons located close to Saturn. Pallene and its neighbor Methone, both just a few kilometers in diameter, were discovered in Cassini images; they orbit between Mimas and Enceladus, outside the main ring system.
The discovery was made by Cassini as it approached Saturn, before its orbit insertion; it took a long movie focused on one ansa (handle, or edge) of the rings, looking for dots that moved in a consistent fashion from frame to frame. Pallene's neighbor Methone was the first to be discovered in Cassini images. This really is the best image we have of Pallene, and because the narrow-angle camera is capable of higher resolution than any of Cassini's other instruments, this image basically summarizes everything we know about the little moon, apart from its orbital path. It's not much. No matter how much data Cassini takes, how many times the mission is extended, there will always be things left unstudied and more to explore. This is a tiny world, but it is a world, about the size of Steins or Wild 2, and those were unique and interesting -- I'm sure Pallene will be too, whenever we manage to get close enough to it to learn more.