The Antarctic Deep Field Is Not for the Impatient

I've posted another week plus worth of updates on the 2008-2009 Antarctic Search for Meteorites expedition, in which the bloggers seem to be growing increasingly punchy as they spend more time in tents far from civilization without such amenities as showers or warmth or dark nights in which to sleep. They seem to be keeping their spirits up though, and when the weather gods are kind to them, they have productive meteorite-gathering days. I am also really enjoying their device of ending each day's post with a summary of what Shackleton and his poor team were suffering through on the same date, one century ago.

The latest updates are posted on two pages here:The Antarctic Deep Field Is Not for the Impatient 237 Meteorites Await the Long Drive to Houston 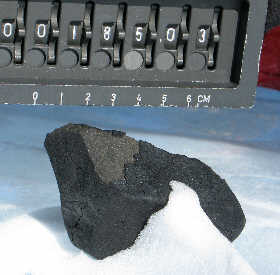 This tiny rock fragment is probably an achondrite, a tiny piece of an ancient asteroid that was large enough to have differentiated into mantle and crust. The parent body would have been an interesting world if it had survived to the present day, but some catastrophic crash broke it to bits, and all that remains of it are tiny fragments like this one.