As MESSENGER zoomed toward Mercury for its third flyby, it was commanded to rotate in a maneuver that would help it test a surprising result from the second flyby. Just after that rotation maneuver began, there was a "hiccup," in the words of principal investigator Sean Solomon; the spacecraft computer detected something unexpected in the power system, and halted the acquisition of science data. But in the minutes before the shutdown of science systems, MESSENGER gathered just enough data to prove that Mercury's surface is unexpectedly rich in iron and titanium, a finding that will force planetary geologists to rewrite their stories about the formation of the innermost planet. 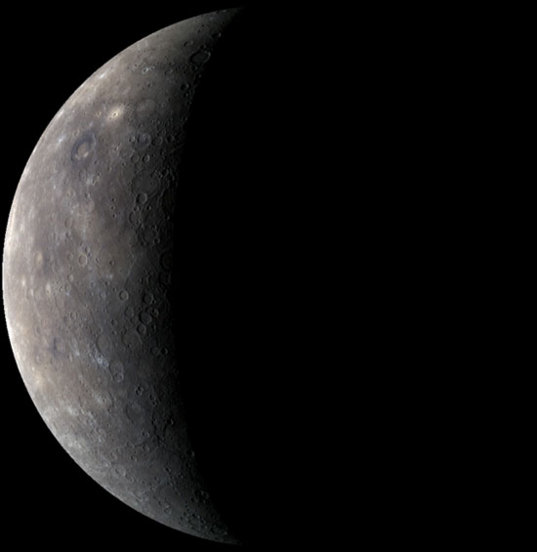 MESSENGER obtained this color view of a crescent Mercury on approach to its third flyby, on September 29, 2009.

The data haul from the flyby, though only half the amount that had been planned, included the images necessary to fill the largest remaining gap in MESSENGER's global map of the planet. Those images included the "most spectacular" volcanic vent feature yet seen on the planet, as well as evidence for geologic activity on Mercury as recently as a billion years ago. "After Mariner 10, it was thought that internal volcanic activity on Mercury ended earlier than on any other planet," MESSENGER imaging team member Brett Denevi said. "Now we're realizing that's not the case."

Not Iron Poor After All

Mercury has long presented a conundrum to planetary scientists, MESSENGER participating scientist David Lawrence explained in a press briefing Tuesday. Mercury is known to have the largest metallic core, relative to its diameter, of any of the rocky planets. But, Lawrence said, "many space and Earth based measurements have shown Mercury's surface has a low concentration of iron within silicate minerals. Since silicate minerals typically dominate the bulk composition of planetary bodies, this observation has led to a commonly-held view that Mercury's surface has generally low abundances of iron as well as titanium. As a consequence, it has been a puzzle for studies of Mercury to explain how a planet can have such a large, iron-rich core but have a surface with such a very low iron content."

"Silicates" are minerals that consist of metal ions bound to groups of silicon and oxygen atoms. Silicate minerals such as feldspar, olivine, and pyroxene form the bulk of the rocky outer layers of Earth, the Moon, Mars, likely Venus, stony meteorites, and the rocky asteroids they come from. Iron-bearing silicate minerals can easily be detected remotely using near-infrared spectroscopy. So their apparent absence on Mercury's surface is a real puzzle.

The dearth of iron-bearing silicate minerals on Mercury is documented using infrared spectroscopy. Before MESSENGER's flybys, there had been no direct test of the elemental composition (as opposed to the mineral composition) of Mercury's surface. As MESSENGER flew past Mercury, it pointed its neutron spectrometer at the surface, providing the first direct test of the exact abundance of iron and titanium in Mercury's rocks. 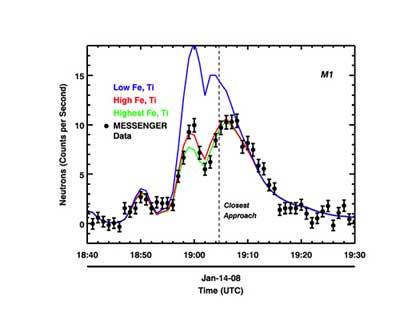 During MESSENGER's closest approaches to Mercury on January 14, 2008 ("M1") and September 29, 2009 ("M3"), it used its Neutron Spectrometer to determine the abundance of the elements iron and titanium in the surface. Near closest approach on both of these flybys, the spacecraft was commanded to rotate in a way that would increase its sensitivity to the neutrons flowing off of the surface. On these two diagrams, black dots represent the neutron spectrometer data; bars above and below the dots are the measurement uncertainty. The blue, red, and green lines are the predicted neutron counts for surfaces containing low, high, and very high abundances of iron and titanium, respectively. MESSENGER counted unexpectedly low numbers of neutrons, indicating that the surface has much higher iron and titanium abundance than previously thought.

The low amount of neutrons is a perfect fit to models containing high iron and titanium content, similar to that found in the dark basaltic rock of the lunar maria. "It's significantly higher than previously appreciated. That's a pretty exciting result for us," Lawrence said. But it's also "perplexing," because the iron is known not to be in the usual location, silicate minerals. "The iron is probably wrapped up in some other kind of mineral, like titanium oxide." Although the results from MESSENGER's neutron spectrometer mean that planetary scientists no longer have to evoke convoluted ad-hoc explanations for how Mercury could have an enormous iron core while lacking iron in its crust, the puzzle has just been replaced with a different one, as Solomon explained. "The neutron spectrometer results have confirmed that the outer silicate shell of Mercury had more iron than most of us appreciated, because that iron does not appear in silicates. So we have an even greater challenge because the iron is in a form that we don't normally encounter in other planetary situations. It's going to be a volley back to our geochemists and our petrologists to come up with a scenario that's going to be consistent with our observations."

Mercury's Story Is Longer than We Thought 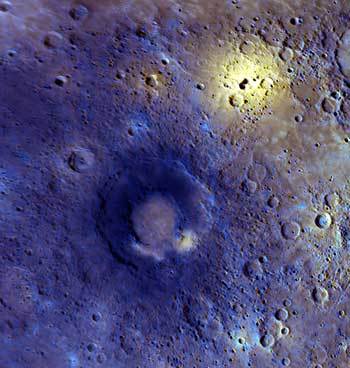 This image was created by applying a statistical technique to color data captured by MESSENGER's wide-angle camera to emphasize subtle variations in spectral properties. The bright splash at upper right identifies the location of a likely volcanic vent. At the center, an unnamed peak-ring impact basin makes a dark splotch. However, the center of the basin is similar in color to the volcanic plains outside it, indicating that the basin has been modified subsequent to its formation. 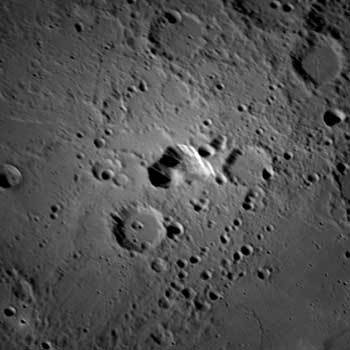 MESSENGER saw this irregular, rimless depression on approach to its third flyby. The depression is approximately 30 km across and is surrounded by highly reflective material. Its features are distinctly different from those of impact craters, so it is suspected to be volcanic. The high-reflectance halo surrounding this enigmatic feature differs in color from the surrounding plains; it may represent a deposit of volcanic cinders more than 150 kilometers across. 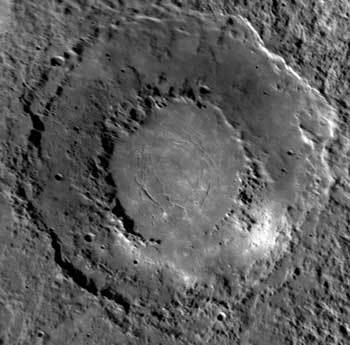 This spectacular 290-km-diameter double-ring basin seen in detail for the first time during MESSENGER's third flyby of Mercury is remarkably well preserved and appears to have formed relatively recently, compared with most basins on Mercury. The low numbers of superposed impact craters and marked differences in color across the basin suggest that the smooth area within the innermost ring may be the site of some of the most recent volcanism on Mercury.

Those observations also include evidence that Mercury has been a volcanically active place for much longer than previously imagined. This much had been learned during the previous two flybys, but the terrain newly imaged during the third flyby held two previously unseen outstanding examples of that volcanic activity.

The first is a feature that had been previously seen as a bright splash on Mercury's surface, but only at relatively low resolution. The high-resolution photos snapped by MESSENGER on approach to this flyby make it clear that the splash is a halo of material, probably volcanic cinders, tossed out of an enormous, steep-sided hole in the ground that is almost certainly a volcanic vent, Denevi said: "It doesn't have a raised rim, it is very steep, and it has this odd shape, all of which are characteristics of a volcanic vent. It's one of the best examples on the planet." At roughly 30 kilometers across, it is one of the largest such features yet spotted by MESSENGER.

The other is a peak-ring basin, an impact crater large enough to have formed a central ring complex in addition to its outer rim. (These basins are more common on Mercury than on the Moon because of Mercury's higher gravity.) Seen for the first time by MESSENGER, the 290-kilometer-diameter basin has no name, but resembles another one discovered during MESSENGER's first flyby and now named Raditladi. Raditladi and this basin are unusual for having extensional faults within their inner basins; most of the faults visible on Mercury formed not from extension but from contraction, as the entire planet contracted while it cooled. But what is even more unusual about this basin is the dearth of impact craters on the smooth inner basin floor, which formed some time after the impact basin. Its relatively unmarked surface indicates that it has not had much time exposed to space to accumulate impact craters, meaning that it must be geologically young, perhaps about a billion years old. Since Mercury has long been thought to have been inactive since 3.8 billion years ago, such a relatively youthful age for a volcanic feature is surprising.

MESSENGER will not enter Mercury orbit until March 2011. Solomon noted that just an hour before Tuesday's press briefing, the countdown clock to orbit insertion ticked past the 500-day mark. But its three flybys have provided plenty of data for scientists to chew on until then. "Studying the planet is like reading a mystery novel by Dorothy Sayers or Agatha Christie," Solomon concluded. "It's like we've read the first four chapters, where Mariner 10 was the first chapter, and each of our flybys was another chapter. We've gained important clues from each of those flybys, but we still have a long way to go to understand the full plot."