MESSENGER is fast approaching the third and final Mercury flyby during its seven-year journey to the innermost planet. On September 29 at 21:55 UTC, it will sweep within 228 kilometers of Mercury's surface. The goal of the flyby is to slow, shrink, and tilt MESSENGER's orbit to more closely match Mercury's, which will permit the smallest planet to capture MESSENGER into Mercury orbit the next time they meet, on March 8, 2011. 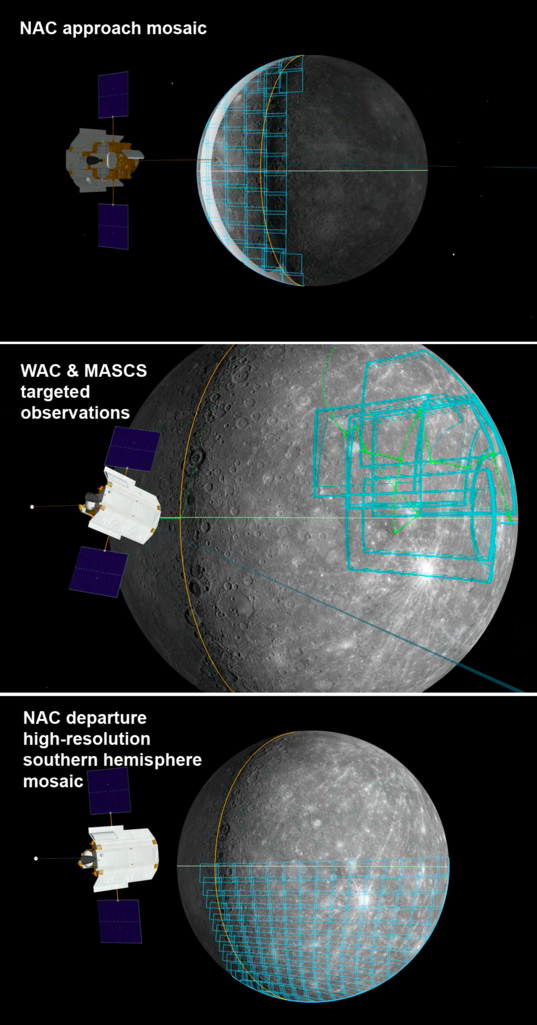 Top: On approach, MESSENGER will capture a view of a crescent Mercury, including a strip of longitude not before imaged by any mission. Middle: near closest approach, MESSENGER's spectrometer (MASCS) and the wide-angle camera will collaborate to acquire targeted observations of interesting targets. Bottom: As it departs, MESSENGER will gather a huge mosaic covering the southern hemisphere, complementing a northern-hemisphere view captured from a similar distance and lighting geometry during flyby 2.

This time around, MESSENGER will have a nearly identical viewpoint on Mercury, with the same hemisphere sunlit, as it had during its previous flyby, on October 6, 2008. "That's why we have elected to use this flyby to do a lot of targeted observations that build on the discoveries of flybys 1 and 2," principal investigator Sean Solomon said during a telephone press briefing today. The coordinated science observations are designed to examine the composition of the surface rocks and explain some of the questions raised after the previous encounters.

So the science team has picked nine targets with interesting color properties as seen with the wide-angle camera, and will be targeting it with the Mercury Atmospheric and Surface Composition Spectrometer, or MASCS. As MESSENGER shoots past Mercury, it will turn to stare at each of these points for 35 seconds apiece. During that stare, MASCS will gather color information in hundreds of tiny slices of the electromagnetic spectrum from the ultraviolet to the infrared, allowing scientists to study how the composition of the surface varies from point to point. At the same time, the wide-angle camera will shoot images of the chosen targets through all eleven filters. 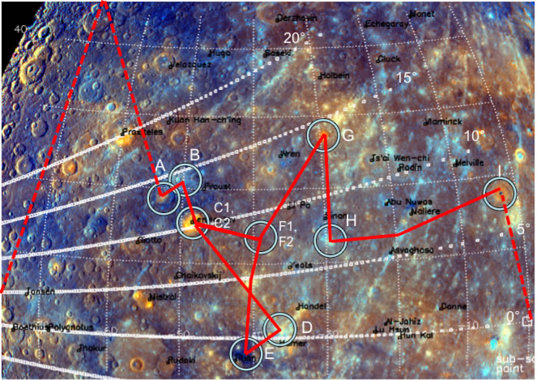 Targeted observations during the third MESSENGER flyby of Mercury

Because the geometry of flyby 3 was so similar to flyby 2, MESSENGER scientists were able to use flyby 2 observations to plan a series of detailed observations just after closest approach on flyby 3. This map shows how the MASCS spectrometer and wide-angle camera will track across the surface to examine nine chosen interesting locations:
A: An unnamed crater with unusual bright material on its floor.
B: An unnamed crater with a set of young ejecta rays that are light blue in the enhanced-color view.
C (1 & 2): Crater Lermontov. The bright yellowish color in the enhanced-color image and the irregularly shaped depressions on its floor may be evidence of past explosive volcanic activity.
D: North of crater Homer. An area with an interesting mix of both light blue ejecta and bright orange materials.
E: Near crater Titian. Enhanced-color images show a region of comparatively deep blue material that is dark and of a different composition than the majority of Mercury's surface.
F (1 & 2): Common plains material. This target resembles a type of material that covers much of Mercury.
G: An unnamed crater with an intriguing bright yellow-orange color in enhanced-color views.
H: Ray material from a spectacular rayed crater in Mercury's north. The ray material appears bright blue in enhanced color.
I: A common area of Mercury's surface that will be viewed by MASCS very obliquely.

On approach to the encounter, they'll also gather images that will fill in the last longitudinal slice of Mercury not yet imaged by any spacecraft, amounting to about five percent of Mercury's surface. Once this third flyby is complete, "we'll be missing only some polar areas," Solomon said. 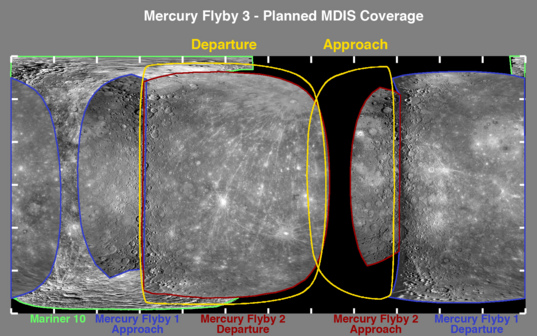 As MESSENGER approaches for its third flyby of Mercury, it will capture images covering the last major swath of the planet not previously imaged by any mission. On its way out, its view will be very similar to the one it had during flyby 2. After the third flyby is completed, only the poles will remain unimaged by MESSENGER.

Just prior to the MASCS targeted observations, there will be another unusual observation performed by MESSENGER's Neutron Spectrometer. The Neutron Spectrometer detects neutrons emitted from Mercury's surface, which arise from bombardment by cosmic rays. Some of these neutrons are slowed by collisions with other elements. Neutrons that have interacted with iron and titanium escape Mercury at a speed of about 2.5 kilometers per second, while the spacecraft will be moving at a much higher speed, about 5 kilometers per second, from west to east. As the spacecraft flies across Mercury, it will sweep the Neutron Spectrometer back and forth, using the Doppler shifting of the observed speed of the neutrons as a sensitive probe of the relative abundance of iron and titanium. This video shows how low (blue line), medium (green), and high (red) abundances of iron and titanium in the surface would appear to the Neutron Spectrometer as MESSENGER performs its close-approach gyrations.

Fewer than six hours after closest approach, after taking one wide-angle color mosaic and two further full-disk narrow-angle camera mosaics, MESSENGER will begin returning data to Earth, beginning with selected high-priority images. Transmission of those high-priority images will be complete by 6:40 p.m. eastern time on September 29; it will likely be a long night for the MESSENGER mission team at the Applied Physics Laboratory in Maryland!

Data relay will continue as MESSENGER carries on science observations. The very last set of planned observations is a wide search for satellites of Mercury. MESSENGER will have a low-phase view of Mercury and any undiscovered moons as it leaves the scene. Three satellite searches should uncover satellites down to 100 meters in diameter.

Following is a moment-by-moment timeline of MESSENGER's science observation plans for the flyby. The times are given according to the spacecraft's clock; during the encounter, the one-way light time for transmissions to travel from MESSENGER to Earth is 6 minutes, 37 seconds. "Dynamic visualization" links take you to the appropriate moment in the MESSENGER mission's Mercury Flyby 3 Visualization Tool. That tool only has a real-time view for the near-encounter phase; for a longer-term real-time view of MESSENGER's flyby activities, visit Daniel Muller's MESSENGER Real-Time Simulation.

The encounter will slow and shrink MESSENGER's orbit around the Sun and match MESSENGER's orbit inclination to Mercury's. The previous flybys have already shrunk MESSENGER's orbit substantially. During the first and second flybys, MESSENGER's speed relative to Mercury was so fast that the trajectory only barely bent as MESSENGER sped past. This time around, Mercury's gravity will bend MESSENGER's path 49.5 degrees. One result of the greater turn angle is that MESSENGER will get two looks from two different angles of the same territory on Mercury under the same lighting conditions in one flyby.

This is MESSENGER's last encounter with Mercury before it enters orbit on March 8, 2011. Its science orbit will be an elliptical one, with its periapsis at about 200 kilometers' elevation over a point at 60 degrees north latitude and its apoapsis at an elevation of more than 15,000 kilometers. As a result, MESSENGER will get a much closer look at Mercury's northern hemisphere than its southern hemisphere during the operational orbit. The science mission at Mercury will last one year, covering slightly more than two Mercury solar days (one Mercury solar day is 176 Earth days). Much as flyby 3 will perform detailed observations that build upon the global mapping performed in flyby 2, MESSENGER will use the second Mercury solar day of observations to perform focused studies that target interesting spots observed during the first solar day of global mapping.