From the "playing with particle accelerators" department

Thanks to ilbasso over at unmannedspaceflight.com for posting a link to this cool video showing what happens when you point a particle beam (a small one) at a Webcam. And before you get too excited, the Webcam doesn't blow up or anything -- but what happens is quite educational!

What you see is lots of little white "snow" dots appearing on the video image, speckles indicating where hits by protons briefly excited the detectors within the Webcam. Once in a while, a hit is powerful enough that it causes permanent damage to the Webcam's detector (these are helpfully called out in the animation). This is closely analogous to what happens when cosmic rays, or protons within a magnetic field, strike the sensitive detectors of space cameras. Most of the time, you get a bright dot or streak across an image; once in a while, a hit causes permanent damage to the detector, and every image taken by the camera for the rest of the mission has a dot on it in the same spot. Here's an example of a Cassini image that shows the effects of lots of proton hits (I am guessing these mostly originate within Saturn's magnetic field). 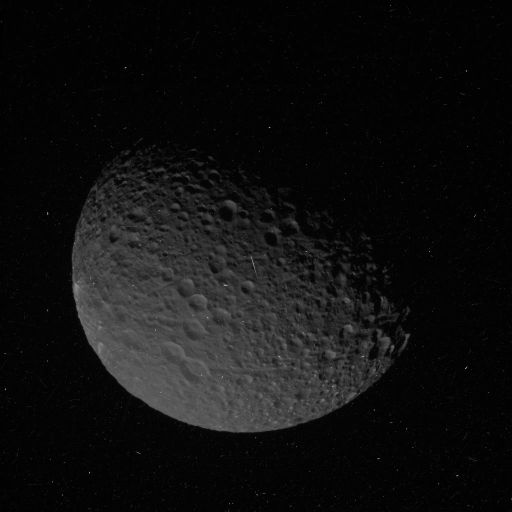 Cosmic ray hits on a Cassini image of Mimas

Cassini captured this photo of Mimas on April 15, 2005. A filter in front of the camera optics allowed only ultraviolet light to reach the detector. At this wavelength, with a relatively long exposure, the detector recorded a large number of hits by energetic protons. Some of the hits appear as bright points; others appear as streaks and record a hit from a ray that was traveling close to parallel to the face of the detector. Some of the protons are cosmic rays, while others were traveling within Saturn's powerful magnetic field.
These proton hits can be more than merely annoying. When a spacecraft like Cassini is being used to search for tiny undiscovered moons, it would be nice to be able to just point the camera at one spot and take many hundreds of photos, then use a computer program to shuffle through the photos looking for spots that move from frame to frame. Cosmic ray hits can cause havoc with simpler algorithms, fooling the computer into thinking it's found lots of moons; so it takes a lot of tedious human work to sift through photos and find real candidates for new moons.

The video was produced by the education personnel on the "Cosmic Ray Telescope for the Effects of Radiation" or CRaTER instrument on Lunar Reconnaissance Orbiter; the particle accelerator apparently belongs to the Proton Therapy Center at Massachusetts General Hospital, which is interesting in itself.

Don't forget about my fund drive -- we really need your donations! Please show my bosses that you value my work.