Odds and Ends: Outer solar system not as crowded as the inner

In the spirit of trying to start out the new year with a blank slate, I'm going to try to post brief notes on a bunch of science stories that have been crowding my inbox. The first is a press release titled "Outer solar system not as crowded as astronomers thought," referring to an article recently published in Astrophysical Journal Letters on the "First Results from the Taiwanese-American Occultation Survey (TAOS)." They found that unlike the asteroid belt, the Kuiper belt doesn't contain very many small objects.

The Taiwanese-American Occultation Survey (description here) used three small (20-inch or 50-centimeter) telescopes with wide fields of view (2 square degrees) equipped with 4-Megapixel CCDs to search for previously unknown Kuiper belt objects, monitoring patches of the sky to watch for the telltale winking out of a star as an object passed in front of it. These events, called occultations, are statistically rare, but if you can make enough observations with a robotically-equipped telescope, you should observe them happening. The organizers of TAOS thought that with 100 billion measurements per year (which is a lot by anyone's standards, I think), they should see somewhere between 10 and 4,000 such occultations as objects with sizes between 0.5 and 28 kilometers passed in front of the stars. The huge range in that number reflects the poor state of understanding of just how many small objects there are in the Kuiper belt.

So, how many occultations did TAOS observe? None! They took 200 hours' worth of data over two years, and found no occultations. (They did test their methods using predicted occultations by larger objects and asteroids, so there wasn't anything wrong with their equipment or their method.) That means there must be far fewer of those small objects out in the outer solar system than astronomers thought. The press release included a couple of speculative explanations: "perhaps because small KBOs have already stuck together to form larger bodies or frequent collisions have ground down small KBOs into even smaller bits below the threshold of the survey." 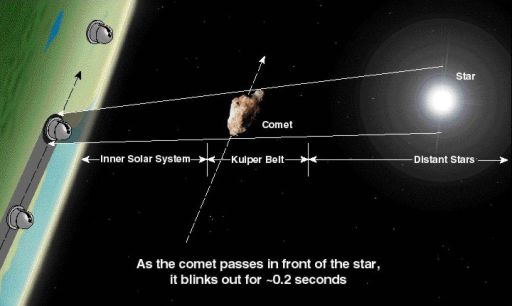 Small telescopes on Earth can detect previously unknown Kuiper belt objects by surveying large patches of the sky and watching for occultation events, when small objects pass in front of background stars, momentarily blocking their light.