NASA announced this week that they are commemorating the 40th anniversary of the Apollo 8 Christmas Eve on NASA TV this December 24 and 25. Apollo 8 launched on December 21, 1968. It took three long days for astronauts Frank Borman, James Lovell, and Bill Anders to journey to the Moon, the first men to do so. They orbited the Moon ten times. During the trip, they famously read aloud, over a television feed back to Earth and shown live on television around the world, the first ten verses from the Book of Genesis. The camera was not pointed on their faces; instead, it pointed out the window to a view of Earth, marbled with deep ocean blue, desert ochre, jungle green, and cloud white, floating in black space above the colorless, barren landscape of the Moon. That image is possibly one of the most significant of the twentieth century. This all unfolded long before I was born; I've always lived in an age where images of Earth against the blackness of space were an integral part of our culture. I'll be watching the broadcast and trying to think about what it would be like to see that for the first time.

Here's the NASA TV schedule for the special event and the press release describing the programming. In the press release they mention that the regularly scheduled Video File segments will show Apollo 8 footage as well. If you aren't lucky enough to have DirecTV or other satellite service or a cable company that carries NASA TV, you can watch the feed on the NASA website. 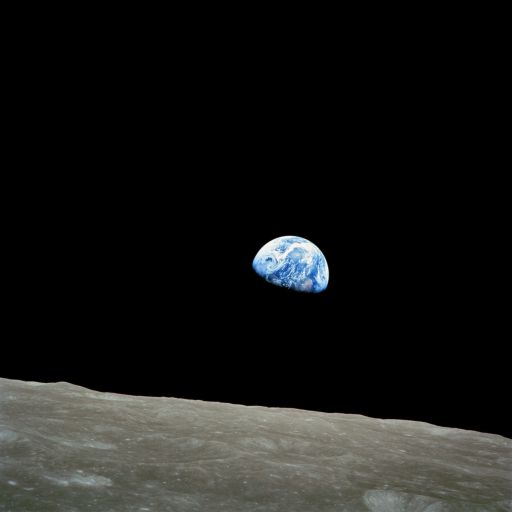 Earthrise over the lunar horizon