AGU: An update on Kaguya

On Monday afternoon at the American Geophysical Union meeting there was a short session, comprising four talks, on the status of Kaguya, Japan's enormous lunar orbiter. The first presentation was an overview of the mission; the next three presentations focused on individual instruments.

The first presentation, by N. Namiki, presented a new map derived by Kaguya of the gravity field of the Moon. This is probably the most important contribution of Kaguya to lunar science. The force of gravity felt by a spacecraft is a sensitive probe of the distribution of mass at the surface and near-surface interior of a planet, and a very important clue to the history of a planet's formation. Getting a map of the gravity field of a planet usually involves two-way Doppler tracking of a spacecraft's radio signals from Earth-based radio antennas. The problem with gravity mapping of the Moon has always been that we can only see one hemisphere of the Moon from Earth; we've never been able to track spacecraft that orbit close to the far side of the Moon, because the Moon blocks our line of sight to the spacecraft. So we have pretty decent maps of the gravity field of the near side of the Moon, but generally pretty lousy data on the far side.

Kaguya sought to solve this by employing a relay satellite, so that while the main spacecraft passed over the far side of the Moon, its signals would be related to Earth via a relay satellite in a higher orbit; instead of two-way Doppler tracking, it's now four-way (Earth to relay to Kaguya back to relay to Earth). The technique seems to have been successful, because they showed dramatic improvement in the quality of the gravity map over the lunar farside. Here's a small piece of the farside gravity map; the left panel is from Lunar Prospector, the best-to-date data set, and the right panel is from Kaguya. 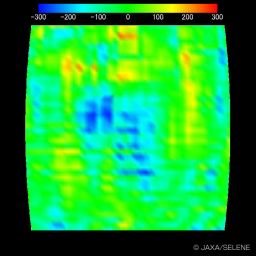 The force of gravity felt by a spacecraft as it orbits a planet is affected by the inhomogeneous nature of the planet below it. Positive gravity anomalies, shown in red, result from an excess of mass, either where there is a topographic high or an extra-dense bit of lunar terrain below the spacecraft. Negative gravity anomalies, shown in blue, result from a deficit in mass, topographic lows or less-dense regions. Maps of the gravity field are one way to probe the subsurface of a planet. Namiki went on to show that there's an interesting difference in the gravity signatures over basins on the near side and on the far side. Nearside basins (like the one shown below) are gravity "plateaus," areas of locally high gravity with steep edges. Farside basins (like the one shown above) have concentric structures -- a central gravity high, which is surrounded by a low, which is surrounded by another high. Namiki said that these indicated that the farside crust is more rigid than the nearside. 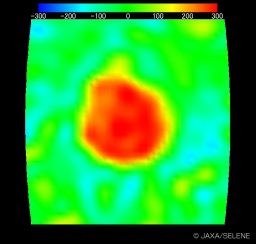 The next presentation was by A. Kumamoto on the Lunar Radar Sounder data. Kaguya's radar sounder has similar goals to MARSIS on Mars Express and SHARAD on Mars Reconnaissance Orbiter, to use long-wavelength radio waves to search the subsurface of the Moon for layer boundaries that will reflect the radio waves. On Mars, though, the goal is generally to look for subsurface groundwater or ground ice, and secondarily to look for layering within rocks and soils. On the Moon, no water is expected; instead, they are primarily looking for the shape of the boundaries between mare basalts and the lunar crust below it. Kumamoto showed that the radar sounder had successfully detected layers located a few hundred meters beneath the lunar surface. He contrasted this with data taken during the Apollo Lunar Sounding Experiment or ALSE, which found layers at depths measured in kilometers; the difference is primarily due to the difference in vertical resolution of the two experiments. Apparently, the experiment is now over; the Lunar Radar Sounder obtained only 98 days' worth of data before stopping "due to hardware trouble." The session chair asked Kumamoto if Kaguya's radar sounder was also capable of detecting reflectors at the depths samples by ALSE, but it wasn't clear that Kumamoto understood his question, and I am not sure if he answered it.

The final presentation was on results from the Kaguya Laser Altimeter or LALT, presented by H. Araki. They're still mapping, but they already have an excellent product, with major improvement especially in the polar regions over previous topographic maps. A laser altimeter gathers many linear topographic profiles along the spacecraft's ground track, so the measurements are spaced much closer together where the ground tracks cross near the pole than they are near the equator. At the equator, there are still gaps between adjacent laser altimetry profiles of up to 10 kilometers. Araki said that the altitude measurements are highly precise, with a point-to-point accuracy of about 1 meter; due to various biases, the altimetric measurements over a whole orbit are accurate to a vertical resolution of about 12 meters. He said that the highest point on the Moon is in the south rim of Dirichlet-Jackson basin, at an elevation of 10.75 kilometers. The lowest point is within a small crater on the floor of the crater Antoniadi, which is itself within the south pole-Aitken basin on the lunar farside. Here's a comparison of the previous best map to the current Kaguya map. 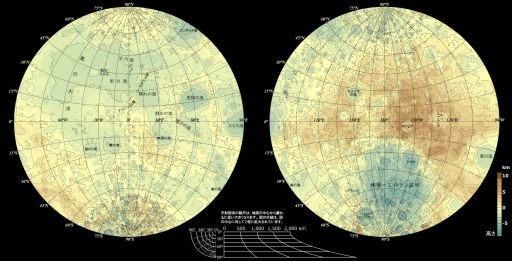 This map of lunar topography was published in 2005 by the United States Geological Survey and is based upon the Unified Lunar Control Network, which was derived from a combination of Clementine images with a previous network derived from Earth-based and Apollo photographs, and Mariner 10 and Galileo images.
The differences between the two maps are not obvious at this scale, so I've picked at random an area of the lunar farside to look at in detail, comparing between the previous Unified Lunar Control Network map (top) and Kaguya (bottom). 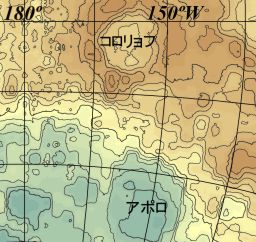 Topographic map of the Moon (detail)

There's a lot of cool things you can do with this new topographic data. For just one example, Araki used it to calculate the area of the Moon's poles (the areas poleward of 87.5 degrees latitude) that were in permament shadow over a period of 2,000 days. He found that a cumulative area of 844 square kilometers near the north pole never saw the Sun during that time. By contrast, 2,751 square kilometers near the south pole were in permament shadow during this time. He said the results are in press in the journal Geophysical Research Letters.