I'll have much more to say about Titan later today, but this was perhaps the most surprising point made in this morning's sessions at the American Geophysical Union meeting about Saturn's largest moon, Titan: Ganesa macula is not a dome.

Most of you are probably saying "The what what isn't a dome? And why should I care?" So let me explain. First of all, here is a Cassini radar image of the feature on Titan that is named Ganesa Macula. 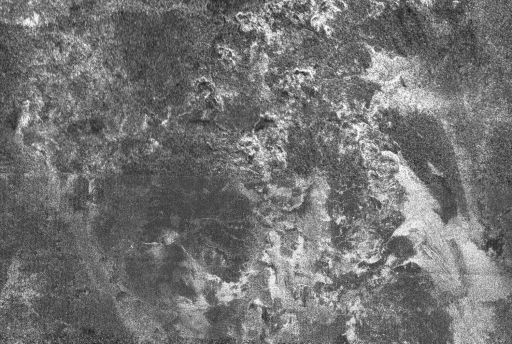 This image is a mosaic of two strips of radar data captured by Cassini on October 26, 2004 and January 13, 2007. The strips cross a circular feature that has been named Ganesa Macula that is interpreted by many researchers to be a cryovolcanic dome, analagous to the steep-sided domes frequently seen in Magellan radar images of Venus. Ganesa is the circular feature to the left and below of center. The image is about 570 kilometers wide and 390 kilometers high.
If you're having a tough time figuring out what in this image is Ganesa, here's a cartoon map. 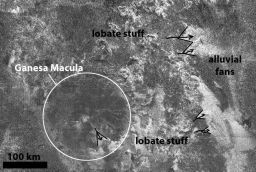 People who are familiar with the use of radar in planetary imaging immediately compared Ganesa macula to a type of feature that is found across Venus (the other planet, besides Earth, that has been imaged using radar): the steep-sided dome, otherwise known as the "pancake dome." Here's one example image of a series of overlapping pancake domes. 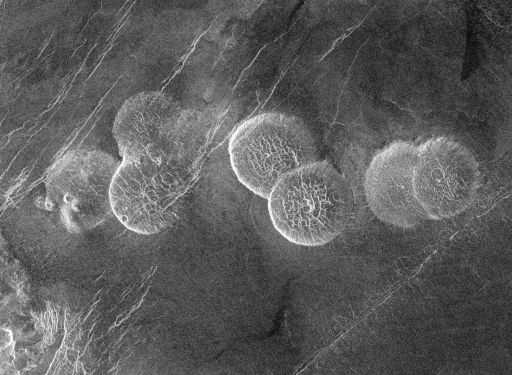 Among Venus' many volcanic features are steep-sided domes. The seven domes in this image are about 25 kilometers in diameter, with heights of up to about 750 meters. They probably formed when viscous lava erupted from a central vent onto a flat lava plain. The exterior cooled before the eruption ended; the cooled surface cracked as it stretched from the lava that continued to flow within the structure. Source
As their colloquial name suggests, pancake domes are generally flat on top, with steep, convex-upward edges. There's usually a central pit. On Venus, which is rich in volcanic landforms, I think there is pretty good agreement that pancake domes result when a fairly viscous lava erupts from a central vent, spreading out in all directions until it solidifies. The steep edges result from how viscous the lava is. The fact that there's pretty good agreement on this is remarkable; the Venus research community is a factious one.

The similarity between Ganesa macula and steep-sided domes is often cited as one of the best examples of a cryovolcanic structure on Titan -- that is, a topographic feature built by stuff (in this case, a liquid water or water-ammonia "magma") welling up from depth and flowing out onto the surface, a process that could help replenish Titan's atmospheric reservoir of methane. But today Randy Kirk, from the United States Geologic Survey, gave a presentation on new data on the topography of several places on Titan, derived from the same radar data that originally gave us the image of Ganesa. Unfortunately I don't have the topographic image to show you.

To describe it, though: there is nothing dome-like about Ganesa. What is described as the eastern "edge" of Ganesa is a sort of linear topographic high, a mountain ridge, which is deeply incised by the alluvial fan feature I pointed out on the cartoon image above. The western "edge" is actually a local topographic low. There is just nothing in the topographic data that suggests that the feature called Ganesa macula is even worth a name. That doesn't mean that it shouldn't be named. Xanadu, the huge bright continent that covers most of a hemisphere of Titan, is also not obvious in topographic data. But Ganesa is not a dome, which means it's no longer resonable to cite it as the most obvious example of a cryovolcanic feature on Titan.

More on what this means for cryovolcanism on Titan later. Now I have to listen to the Phoenix press briefing!