Blogs from the 2008-2009 Antarctic Search for Meteorites expedition

A while ago I received an email from a meteoriticist named Ralph Harvey, who's in charge of the annual Antarctic Search for Meteorites (ANSMET) expeditions, in which a small team of Antarctic explorers and geologists wanders the wind-scoured icy plains of the interior of Antarctica to hunt for meteorites that have landed on the ice. Antarctica is a particularly good place to search for meteorites, for numerous reasons. The most obvious reason is that meteorites are quite easy to spot against the ice. There's also not really any way that a rock can arrive on these icy plains except by falling from the sky, so, unlike other locations in the world, odds are good that if you spot a rock there, it came from space. The intense cold, desert dryness, and lack of life means that there's very little contamination of the rocks by water or organic materials (especially deep in the rocks' interiors). And there are actually glacial mechanisms that concentrate thousands, even hundreds of thousands of years' worth of meteorite falls at the surface of the icy plains, in certain places.

All of which makes Antarctica one of the most productive meteorite hunting grounds on Earth. But that's not to say the expeditions are easy. Antarctica is much harder to get to than the Arctic. When I spent one week up on Devon Island at the Haughton-Mars research station back in 2002, I could get myself within 50 kilometers of the field site by buying plane tickets on the Internet. Antarctica is really, really, really remote. 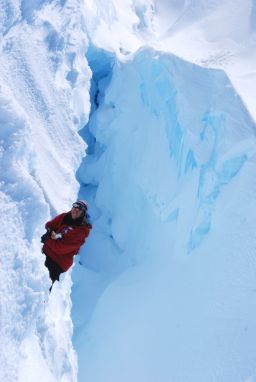 So I was delighted when Ralph told me that they would actually be posting daily updates on a blog about this year's Antarctic expedition. "I have a love-hate relationship with this blog," he said. "It's great outreach and in fact I learn a lot about what I'm doing by seeing what my team writes about it. But it's very difficult to do in terms of time; our only means of connection is the Iridium [satellite] phone system and at best we get slow, short-lived connections (think 2400 baud, 4 minutes tops)." Even with these limitations, they get to post a few hundred words worth of journals and even a couple of small pictures every day or two.

Ralph told me that I am "most cordially invited to steal, borrow, use or misuse what we post at your own discretion." I'm more than happy to do so! So now that the expedition has begun, I'm pleased to present you with the blog entries from their first couple of weeks, which have gotten them as far as McMurdo station in Antarctica, poised to begin "putting out" into the field for their meteorite-hunting adventure.

If you want to follow along daily, you can go directly to the ANSMET blog site to do so; my plan is to watch that site every day and repost the blogs here roughly weekly.

Besides Ralph I know two of the other people on the trip. There's an outer planets satellite researcher named Jani Radebaugh (I'm curious to hear more of why she's on the trip -- obviously she's there to hunt for meteorites, but I wonder if she's exploring it also as an analog for the icy worlds in orbit around Jupiter and Saturn). And the expedition is being led by John Schutt, whom I remember as the expedition leader of my Houghton-Mars trip, near Earth's opposite pole. He's like an Arctic tern -- he migrates from pole to pole each year, enjoying the icily cold but round-the-clock sunny days of each polar summer, year-round. That's quite a life.

I hope you all enjoy the ANSMET blogs!