Mimas, Prometheus, and the rings

I'm almost entirely cut off from the world today -- by which I mean my home Internet access is down. And the wireless network at my local public library is down. So I'm using a terminal at the library with a horrible sticky keyboard. Which means it's not going to be a productive day. The best thing for me to post on this kind of day is go look for a pretty picture and share it with you. So, I wandered to the Photojournal and decided that my favorite recent image is this one taken by Cassini, happening to capture two of the moons of Saturn, Mimas and Prometheus, against a dim backdrop of rings (the rings are usually pretty much the brightest things in an image, so I am guessing we must be looking at the north or shadowed side). Pretty, huh? 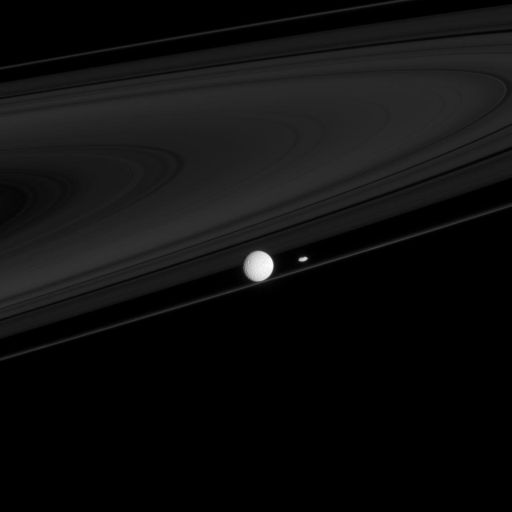 Here, the Cassini orbiter caught a simultaneous view of Saturn's rings and two bodies that strongly influence the rings' patterns. The round moon is Mimas, the mid-sized Saturnian moon that orbits closest to the planet. Mimas has a relatively inclined and eccentric orbit; its orbital plane tips 1.5 degrees up from the plane of the rings. The gravitational influence of Mimas sweeps clean the Cassini division between the A and B rings, while the up-and-down forces exerted by its inclination create other types of spiral waves within the rings. The small potato-shaped moon is Prometheus. Prometheus is a shepherd of the narrow F ring, and, along with its outer partner Pandora, keeps the F ring confined into its bands. However, Prometheus has an eccentric orbit, which occasionally causes it to wander into the F ring proper and then back out, clearing out lanes of dust.
Hopefully Time Warner will give me some love soon and I'll be properly reconnected with the world.