Kaguya now in its extended mission

Chandrayaan-1 arrived at the Moon at just about the time that Kaguya completed its primary mission and entered its extended mission. I've received some information from Shin-ichi Sobue at JAXA on the plans for Kaguya's extended mission, and they're interesting to say the least. 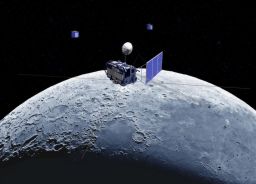 For its primary mission, Kaguya circled the Moon in a polar orbit at 100 kilometers altitude (much as Chandrayaan-1 is now doing). Kaguya will continue doing this until March of next year, when it will shift to a low-altitude orbit, and I mean low. At first, it will reduce its altitude by half, circling at 50 kilometers altitude. At this much lower level, Kaguya will be sensitive to much finer-scale variations in the gravity field of the Moon than it was during the primary phase of its mission. Then, in May, it will shift to a more elliptical orbit, back up to 100 kilometers at apolune but diving to an incredible 20 kilometers at perilune, which will be over the south pole and the very interesting Aitken Basin.

But, given the lumpy gravity field of the Moon, this orbit is not particularly stable. So, later that year, between June and August, Kaguya is expected to crash into the Moon. Kaguya is a very big spacecraft, so this is an event that might be observable from Earth, if the conditions are right. (Obviously it needs to crash on the near side of the Moon, but it'd also be easier to spot the impact, ironically, if it crashed in the dark -- the infrared flash from the heat of impact would be the easiest thing to detect.)